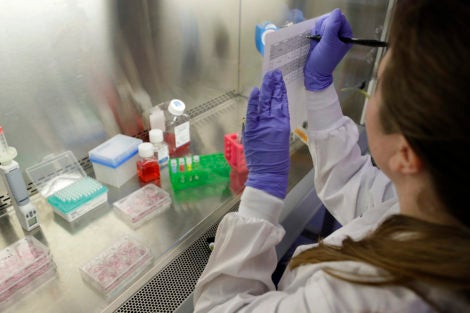 A growing number of United States states are considering a ban on the sale or import of cosmetics that have been tested on animals, as advocates argue testing products such as lotions, shampoos and makeup on rabbits, mice and rats is cruel and outdated.

The cause has gained support from consumers and many cosmetics companies, but the biggest hurdle is China, which requires that cosmetics sold in its large, lucrative market undergo testing on animals.

California, Nevada and Illinois all saw new laws take effect this year that ban the sale or import of animal-tested cosmetics.

The laws, which apply to tests performed after Jan. 1, are not expected to cause much disruption for the industry because many companies already use non-animal testing. Instead, they draw a line in the sand that puts pressure on the U.S. government to pass a nationwide ban and help end China’s requirement that most cosmetics sold in that nation of more than 1.4 billion people undergo testing on animals by Chinese regulators.

China’s policy applies to all imported cosmetics, including makeup, perfume and hair care products, along with some “special use” goods produced in China, such as hair dye, sunscreen and whitening products that make functional claims.

Animal-tested cosmetics already are banned in Europe, India and elsewhere. A ban in the United States, one of the world’s largest economies, would put further global pressure on China to end its policy and push Chinese cosmetics companies to rely on non-animal tests if they want to sell their products in the U.S.

“We’re not trying to create an island out here in Nevada,” said state Sen. Melanie Scheible, who sponsored Nevada’s law. “We are trying to join a group of other communities that have stood up and said, ‘We don’t support animal testing.’”

Animal-rights groups like Cruelty Free International and the Humane Society of the United States hope to get more states to pass bans this year.

Legislation has been introduced or will soon be made public in Hawaii, Maryland, New Jersey, New York and Virginia, according to Cruelty Free International, and a national ban has been introduced in Congress since 2014, though the bipartisan measure has been slow to advance. The most recent version introduced in November marks the first time the country’s leading cosmetics trade group, the Personal Care Products Council, has become a vocal backer of the ban, support that should ease lawmaker concerns about business opposition.

The California, Nevada and Illinois laws create exemptions for any cosmetics that were tested on animals to comply with regulations of a foreign government — an exception that acknowledges the reality that most companies will see their products tested on animals if they sell in China.

Scheible said her aim in Nevada was not to punish those multinational corporations but to raise awareness and put pressure on other governments, like China, to act.

“A lot of people thought that we no longer tested on animals at all,” she said. “They thought that this was already a thing of the past.”

The bans in all three states require cosmetics sellers to use non-animal tests to prove their products are safe. Many international companies are already doing that after the European Union passed a series of similar bans on animal testing, culminating with a 2013 ban on the sale of animal-tested products.

Supporters note that science has advanced, allowing companies in most cases to use non-animal alternatives — such as human cell cultures or lab-grown human skin and eye tissue — to test whether a product or ingredient is safe.

For example, EpiDerm, a synthetic skin tissue made by Massachusetts-based MatTek Corp., is created from cells taken from skin donated during procedures such as breast reduction surgery, circumcision and tummy tuck procedures.

Products can be applied to synthetic tissue to determine whether they cause skin irritation, damage, sensitivity or other issues. That can be used in place of testing a product on the back of a shaved rabbit, animal rights supporters say.

Some of the biggest names in personal care and beauty, including Avon, Unilever and Procter & Gamble, have used MatTek’s tissues for testing.

Carl Westmoreland, a safety scientist with Unilever, said the European Union ban drove more innovation in non-animal testing. Companies like Unilever, trade groups and advocates are among those working with Chinese regulators and scientists to push for new rules, helping to familiarize them with procedures and results from non-animal tests.

“They have been changing and are continuing to change,” he said, noting China in recent years has allowed some cosmetics produced within the country to avoid animal testing.

Francine Lamoriello, executive vice president for global strategies at the Personal Care Products Council said it is a slow process, but Chinese regulators are working to accept non-animal tests.

“They’re having conferences. They really seem to be quite motivated to do as best as they can to accept and validate certain methods,” she said.

The Personal Care Products Council supports most of the state legislation but is pushing for a nationwide law instead of a patchwork of rules across the country.

Similar to the state laws, the proposed ban before Congress would exempt cosmetics required to undergo testing in China. It would allow those products to be sold in the U.S. as long as sellers relied on additional, non-animal tests to show they are safe.

California was first to pass the legislation in 2018, a move that is part of the state’s pattern of wielding its status as the world’s fifth-largest economy to push change.

“That’s the beauty of doing things in California,” said Judie Mancuso with the group Social Compassion in Legislation who pressed for that state’s ban. “You set the stage, you set the standard, and others grab it and grow.” CL/NVG

Beauty brands that embraced veganism in 2019