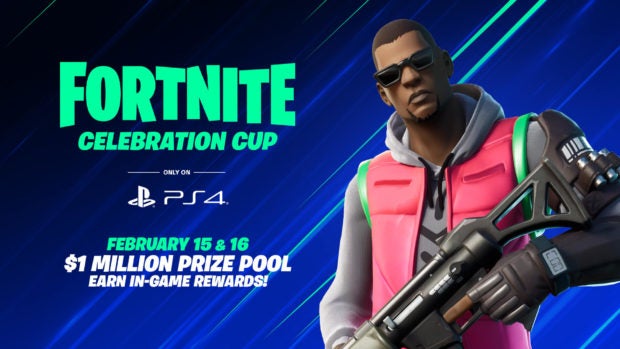 A February 2020 Fortnite Celebration Cup has PlayStation cozy up with Epic Games for the weekend. Image: courtesy of Epic Games via AFP Relaxnews

A two-day “Fortnite” competition is being held by PlayStation this February, open to players who are 13 years old or over with a Fortnite game account at level 15 or more.

The weekend contest also encourages the “Fortnite” PlayStation community to secure their accounts using Two-Factor Authentication (2FA), requiring entrants to have the identity authorization method in place in order to sign up.

Day one of the tournament focuses on cosmetics, with Feb. 15 players competing for an in-game Take Cover spray (for the top 50% on each regional leaderboard), Wild Accent pickaxe (top 25%) and Tango outfit (top 5%).

Day two, Feb. 16, has them playing for a share of the overall $1 million (around P50 million) prize pool, split up between the top players in each of seven regions, though not all regions have the same amount of money to distribute.

Precise start times are to be disseminated via the in-game Compete tab.

Though there was no mention of an ongoing collaboration between PlayStation and “Fortnite” company Epic Games, Xbox had previously welcomed previous Battle Royale game (and “Fortnite” inspiration) “PlayerUnknown’s Battlegrounds” to its platform some 15 months before it arrived on the PlayStation 4. IB/NVG