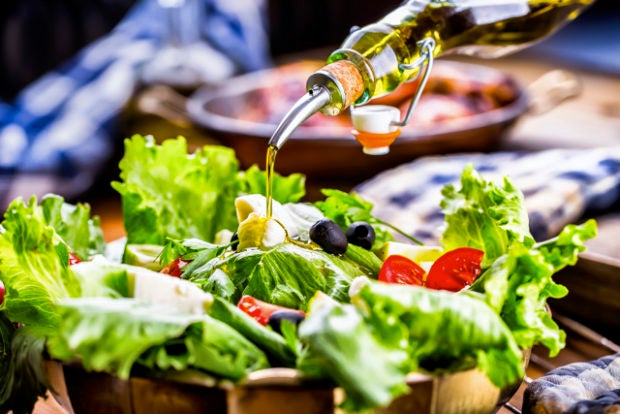 New European research has found that following the Mediterranean diet later in life appears to promote “healthy” gut bacteria which has been linked to reduced frailty and cognitive decline.

Led by researchers at University College Cork, Ireland, along with a team of researchers from across Europe, the new study looked at 612 participants aged 65 to 79 living in France, Italy, the Netherlands, Poland and the United Kingdom.

For the study, the researchers asked 289 of the subjects to follow their usual diet for a period of 12 months, and 323 of the subjects to follow a Mediterranean diet for 12 months, which is rich in fruits, vegetables, nuts, legumes, olive oil and fish and low in red meat and saturated fats, and was specially tailored to meet the needs of older people (known as the NU-AGE diet).

The researchers also analyzed the participants’ gut microbiome before and after the 12 months.

The findings, published online today in the journal Gut, showed that following the Mediterranean diet for 12 months was associated with beneficial changes to the gut microbiome, including an increase in the diversity of bacteria which are linked to indicators of “healthy” aging and reduced frailty, such as walking speed, handgrip strength, improved brain function (such as memory) and a reduced production of potentially harmful inflammatory chemicals.

What’s more, the findings held true regardless of a person’s age or weight (as measured by their body mass index), which are both factors that can influence an individual’s microbiome, and regardless of the person’s country of origin, which also appeared to influence their gut bacteria at the start of the study.

The researchers say the positive changes appeared to be due to the Mediterranean diet being high in dietary fiber and vitamins and minerals, specifically, C, B6, B9, copper, potassium, iron, manganese and magnesium.

They add that although they cannot establish a cause and effect relationship between the microbiome and frailty, they say following a Mediterranean diet may help delay the onset of frailty and cognitive decline.

“The interplay of diet, microbiome and host health is a complex phenomenon influenced by several factors,” they add. “While the results of this study shed light on some of the rules of this three-way interplay, several factors such as age, body mass index, disease status and initial dietary patterns may play a key role in determining the extent of success of these interactions.” RGA