PLDT and its wireless subsidiary Smart Communications, Inc. (Smart) have once more been found to be the country’s fastest fixed and mobile internet networks and continue to set the pace for internet speeds in the country, according to Ookla, the global leader in internet testing and analysis.

The results are based on analysis by Ookla of tests taken with Speedtest®, covering the second half of 2019. Ookla said that Smart posted a Speed ScoreTM of 18.13, with average download speeds of 20.42 Mbps and average upload speeds of 9.87 Mbps, based on 1,822,401 user-initiated tests taken with Speedtest® on LTE-capable devices in the Philippines for the period Q3-Q4 2019. 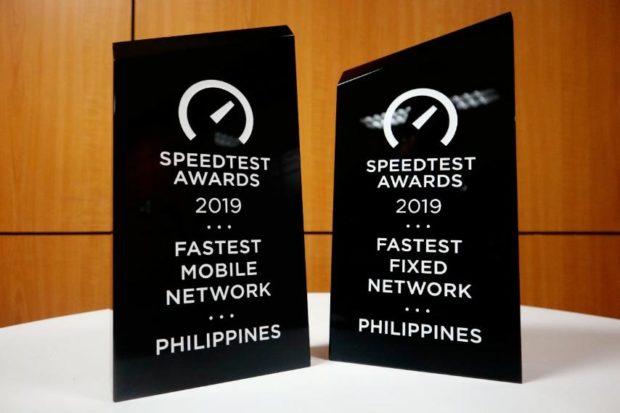 “With millions of tests taken using Speedtest every day, Ookla has developed a robust and comprehensive view of worldwide internet performance. It is our pleasure to recognize Smart as the Fastest Mobile Network and PLDT as the fastest Fixed Network in the Philippines based on our rigorous analysis. This award is a testament to Smart and PLDT’s exceptional performance, as experienced by their own customers, in Q3 and Q4,” said Jamie Steven, Executive Vice President at Ookla.

“The results of these consumer-initiated tests provide further proof that we are achieving our goal of progressively improving the service quality enjoyed by our customers.  Aside from expanding our coverage, we are enabling our customers to have the best experience enjoying entertainment or learning new skills through online video, playing mobile games, or boosting their businesses through social media and online commerce,” said Mario G. Tamayo, PLDT-Smart senior vice president for Network Planning and Engineering.

These results come just as another study shows how important internet and digital services have become to Filipinos.  According to the Digital 2020 report, the Philippines once again tops global rankings in terms of average time spent daily on the internet at 9 hours and 45 minutes— well above the global average of 6 hours and 43 minutes.

The report also shows that the Philippines also leads in terms of average time spent using mobile internet daily, with the average Filipino user logging on to the internet via their mobile phone for 5 hours 11 minutes a day—also above the global average of 3 hours 22 minutes.

In Makati City, for example, Smart posted a Speed Score of 26.95, more than twice that of the competing network. This reflects the continuous network upgrade and expansion activities that Smart undertook in the city, including the deployment of LTE-Advanced and carrier aggregation.

For mobile, Speed Score incorporates a measure of each provider’s download and upload speed to rank network speed performance. Tests used to calculate the Speed Score exclusively come from ‘modern devices’, which are devices capable of connecting to the market’s fastest, generally available technology.

For fixed, Ookla assesses the best network speeds attained across a given network, accounting for tests that are taken on various Speedtest applications that connect to a fixed network, including tests taken on mobile phones over a Wi-Fi connection. Each top carrier accounts for at least 3% of the sample size in the geographic area.

The latest Ookla awards come amid years of sustained investments in the expansion and upgrade of PLDT and Smart’s network. It also affirms findings of a recent report by global benchmarking company umlaut, which is widely regarded as the de-facto industry standard. umlaut awarded Smart the Best in Test award in October 2019, and lauded Smart for having the best and widest 4G/LTE coverage, and fastest upload and download speeds.

The Germany-based company also cited Smart for providing the best network performance during the country’s hosting of the 30th Southeast Asian Games in December.