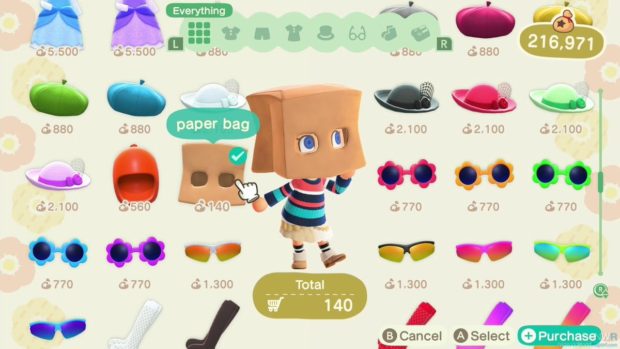 March 20th’s well-anticipated playful life and community simulation “Animal Crossing: New Horizons” will include a wealth of customizations including some paper bag headwear.

Nintendo enthusiast and freelance writer Daan Koopman trying out “New Horizons” as part of a pre-release preview event spotted the Paper Bag item when looking around an in-game shop.

In “Animal Crossing” games, players are represented by a caricatured human avatar, mingling freely and without question among a population of adorable, anthropomorphic animals.

Now… there is a screenshot that I wanted to share. A screenshot that will destroy the entire fabric of your being. Are you ready? Are you? Okay… there is paper bag headgear item. #AnimalCrossingNewHorizons #NintendoSwitch pic.twitter.com/zNrIaSZl3y

The March 20 release is particularly well anticipated and could become Nintendo’s biggest launch this side of the Holiday 2020 season. CL /ra