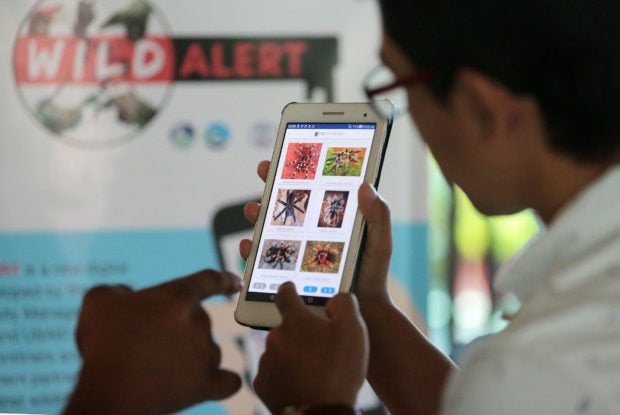 DIGITAL TOOL Fheter John Calanday demonstrates how to use WildALERT, a new digital tool developed by the Department of Environment and Natural Resources’ Biodiversity Management Bureau and US Agency for International Development to help in the fight against wildlife trafficking. —GRIG C. MONTEGRANDE

MANILA, Philippines — For government workers on the front line of defense against environmental crime, identifying wildlife species and reporting illicit activities will soon be at their fingertips.

Field personnel of the Department of Environment and Natural Resources (DENR) will be equipped with WildAlert, a digital tool designed to augment monitoring of wild flora and fauna, and to help curb wildlife trafficking.

Developed through a partnership between DENR’s Biodiversity Management Bureau (BMB) and USAID Protect Wildlife program, WildAlert is primarily a mobile application that is equipped with a species library and a report management platform to easily identify, submit and manage reports from DENR frontliners and other law enforcement officers.

The app, which can work offline and even on low-end smartphones, was initially tested in February among wildlife law enforcers with the DENR. It is expected to be rolled out to field personnel across the country by April.

The tool is also expected to be distributed to the DENR’s law enforcement partners, such as the police, military and the National Bureau of Investigation, said Lawrence San Diego, communications manager for Protect Wildlife.

“In recent memory, this is the only single digital platform that has the function to help identify species and also to submit reports on potential wildlife crimes,” he told the Inquirer.

At present, San Diego said DENR personnel might encounter an unfamiliar species and would take time to confirm its identity with experts. “With this tool, they have a library of species in their pocket.”

With an easily accessible offline digital reference, WildAlert has 480 species in its library, which is easily searchable using the app’s filtering tool.

Environmental workers can choose from categories, including birds, mammals, reptiles, invertebrates and amphibians. Soon to follow are marine species.

The library has photos of wild animals and plants, and provides information about them, such as description, scientific name, local name and ecological status.

If DENR personnel are unfamiliar with the species, they can filter it out in the WildAlert system by providing information about the wildlife. For instance, they can identify the color of its feathers or whether they have scales.

While the app will be rolled out only to wildlife law enforcers, the public can access the species library online at wildalert.ph.

Aside from wildlife identification, WildAlert also provides a centralized reporting feature that can help wildlife enforcers monitor and respond to wildlife crime.

Through the app’s reporting feature, photos and key information can be recorded, geotagged and submitted to the WildAlert report management platform.

These reports can then be accessed and managed by the corresponding DENR field units and the DENR-BMB for immediate and appropriate action.

Even offline, reports can be saved in the app, which will be transmitted once the user connects to the internet.

BMB wildlife law enforcer Rogelio Demelletes Jr. said WildAlert would be a huge help to enforcers who are out in the field.

“If you’re conducting case surveillance, you can easily share your location to others, or provide the nearest landmark, so we can easily respond to the situation,” he told the Inquirer.

Wildlife trafficking is a major problem for the Philippines, where at least P50 billion is lost yearly due to the illicit trade. Wildlife law enforcers play a tough catch-up with traffickers, who get away due to weak prosecution.