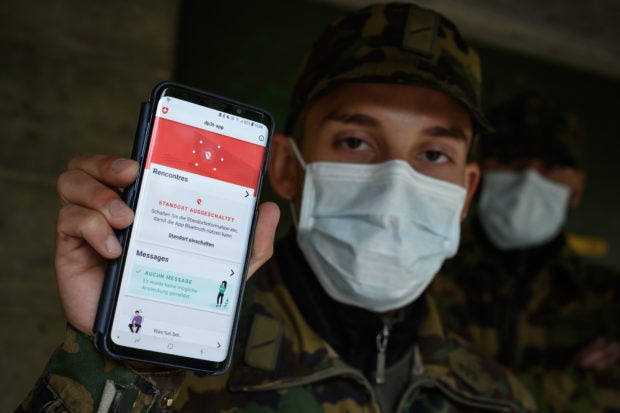 A Swiss soldier wearing a protective facemask poses with his smartphone, on April 30, 2020, at the Swiss army barracks of Chamblon, during field test of an app created by the Swiss Federal Institute of Technology Lausanne (EPFL) that could help trace those who have been in close contact with someone who tested positive for the COVID-19, caused by the novel coronavirus. – A unit of Swiss army conscripts are taking the fight to the coronavirus pandemic by helping to develop a Bluetooth-based smartphone app aimed at suppressing a resurgence of COVID-19. (Photo by Fabrice COFFRINI / AFP)

CHAMBLON, Switzerland — Swiss army conscripts are taking the fight to the coronavirus pandemic by field-testing a Bluetooth-based smartphone app aimed at stopping a resurgence of COVID-19.

The rapidly-created app traces people who have inadvertently crossed paths with someone infected with the virus.

It uses wireless technology with each phone registering the others it has come into close proximity with for a sustained period of time.

For the field test, the infantry recruits went through a normal day: physical training, theoretical study, and shooting at targets 300 meters away.

“What we did before was lab tests. Now we’re gathering data on how this app performs in real life,” Simon Rosch, a software engineer with smartphone app developers Ubique, told AFP.

The military base makes a good testing ground because, unlike civilians, soldiers are still allowed to congregate in numbers in close proximity.

Furthermore, they are isolated from the rest of the population inside their barracks at Chamblon, overlooking Lake Neuchatel in western Switzerland.

If an app user tests positive for the virus, a coded message is sent to others who might have been exposed to that person, with information as to what they should do next.

The aim is to break the chains of transmission and thereby suppress any spread of the virus as lockdown restrictions are gradually lifted.

Ubique, which developed Switzerland’s main weather app, started working on the new tool only a few weeks ago.

They then joined forces with experts from the Ecole Polytechnique Federale de Lausanne (EPFL) university, which had produced similar ideas.

EPFL does the security, research, and Bluetooth tests while Ubique builds that knowledge into the app and comes up with the design and user experience.

“I’m pretty positive about this becoming operational — and it will help,” Rosch said during the test.

“It’s not a magic solution that can make the problem disappear but it’s a good thing that can support us.”

Sitting in a military briefing room armed with a laptop, Alfredo Sanchez went through the first data sets from the field test.

A soldier was designated as if he had tested positive for the virus, and his contacts were then traced.

“It’s in the evaluation phase. The results will mean we will make some adjustments,” said Sanchez, a project manager in the EPFL IT department.

“It’s an idea that started in Asia using GPS, which is a bit more invasive because it tracks exactly where people were,” he told AFP.

“This was created to find a solution that is much more respectful of privacy.”

Because Bluetooth signal cannot travel far, app users must be close to pick up the digital handshake between devices.

It does not matter whereabouts that connection takes place, so no location data is gathered, and the process is anonymous.

“We don’t have the name of the person or the phone number. The app sends a message saying you were in contact on a certain date with a person who tested positive,” said Sanchez.

Switzerland believes it now has the virus under manageable control after more than 1,400 people died in the Alpine nation and 30,000 tested positive.

Matthias Egger, the government’s COVID-19 scientific task force head, told a press conference in Bern on Friday that two surveys now showed around 60 percent of the population would use the app — a high level of reach that would make it very effective.

Rosch said: “The chances that you detect something get higher the more people have it installed.”

A May 11 roll-out date has been floated, to coincide with Switzerland reopening its schools and restaurants.

But it is dependent on a government green light — plus tech giants Apple and Google releasing a new software building block that will facilitate such apps.

Sanchez said any software compatibility adjustments could then be finished by late May or early June.

For now, the as-yet unnamed app is referred to as the Decentralised Privacy-Preserving Proximity Tracing project — or the more “Star Wars” robot-sounding DP3T for short.

The Bluetooth contacts are stored for 14 days on users’ phones, rather than on a central server.

Soldier Colin Galligani, 20, has the test app on his mobile.

“I check my phone regularly to see if I get a message and see if someone is infected,” he said after target practice.

“With the information that EPFL gathers here, they can work on that so they can apply it to civilians.”