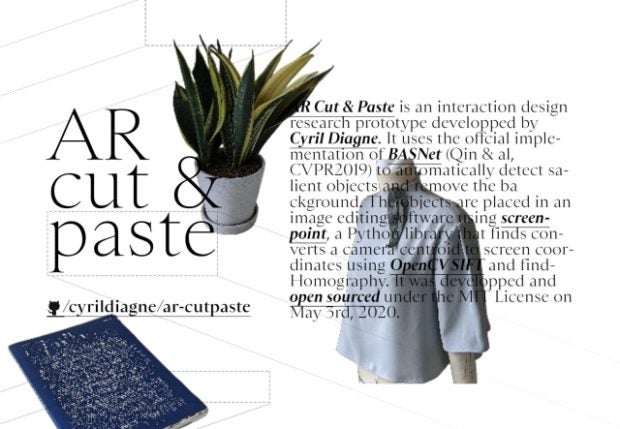 Instead of cropping an item out of a photo you took in Photoshop, artist/designer/programmer Cyril Diagne currently in residency at Google’s Arts & Culture division has created a tool that does essentially everything for you.

In his own words, Diagne states that this tech allows people to “cut & paste your surroundings to Photoshop,” and the accompanying video demonstrates just that: Diagne points his phone camera at various items around his computer like a snake plant and mannequin; these subjects are cropped right from life on the display, and when he points his phone back at an open Photoshop window on this computer, the items are pasted to the document.

4/10 – Cut & paste your surroundings to Photoshop

He lists the technical insights in the thread and describes which tools he used and why. The code for it can be accessed on GitHub, a cloud-based repository on which developers can share code and jointly advance projects.

Right now, this project is simply a prototype, and Diagne offers some ways that it can be improved. Considering that other people and businesses are working on similar technologies as revealed in the thread’s comments, such a tool could be a reality sooner rather than later. RGA

Google makes its video meeting service free to all