Asian giant ‘murder’ hornets spotted for first time in US 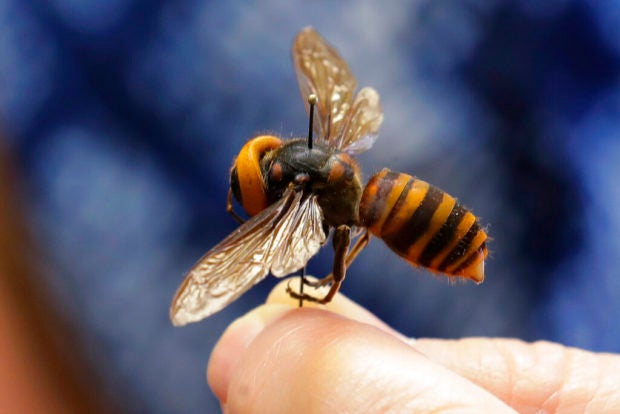 A dead Asian giant hornet sent from Japan is held on a pin by Sven Spichiger, an entomologist with the Washington State Department of Agriculture, Monday, May 4, 2020, in Olympia, Wash. The insect, which has been found in Washington state, is the world’s largest hornet, and has been dubbed the “Murder Hornet” in reference to its appetite for honey bees, and a sting that can be fatal to some people. (AP Photo/Ted S. Warren)

A deadly giant insect known as the “murder hornet” has been spotted for the first time in the United States, prompting fears it could decimate the honeybee population and creating a buzz on social media.

Two of the wasps — the world’s largest hornet species — were discovered late last year in the western state of Washington, and scientists have since been trying to track the invasive insects to eradicate them.

Karla Salp, a spokesperson for the Washington State Department of Agriculture, said it was unclear how the Asian giant hornets — which have orange and black markings and are nearly two inches (five centimeters) in length — arrived in the United States.

“Normally, though, they are unwitting hitchhikers on something (like shipping containers) or someone,” Salp told AFP.

Scientists suspect there are probably more of the insects than just the two spotted last year, which is why a public outreach campaign has been launched to help with eradication efforts.

“During this trapping season and with the help of public education and encouragement to report suspected sightings, we hope to have a better idea of where they are as well as to eradicate them if we can,” Salp said.

Scientists warn that unless the insect is eliminated in the next couple years, it could spread in North America and become permanently established.

Salp said the hornets, which are native to East Asia and Japan, don’t usually attack people, but they are known for decimating honeybee colonies.

“In general, people do not need to worry,” she said. “As long as you don’t step in a nest or approach a beehive they have taken over, there is a fairly low risk that you will be stung.

“That being said, if you are stung, their venom is more toxic than that of local bees and wasps, and they have more of it,” she added.

In Japan, where the insects are hunted and eaten, some 30 to 50 people die each year from their venomous and excruciating sting. 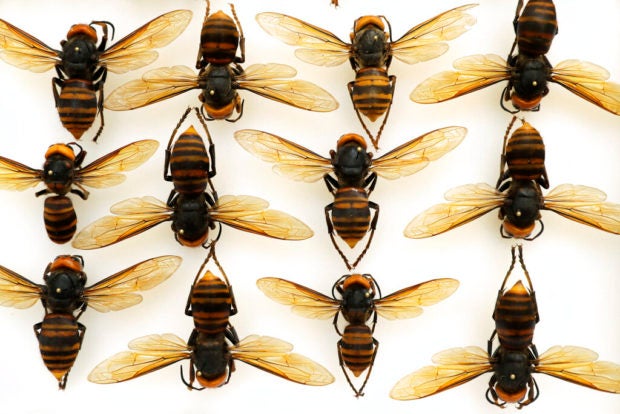 Asian giant hornets from Japan are shown in a display case at the Washington state Department of Agriculture, Monday, May 4, 2020, in Olympia, Wash. The insect, which has been found in Washington state, is the world’s largest hornet, and has been dubbed the “Murder Hornet” in reference to its appetite for honey bees, and a sting that can be fatal to some people. (AP Photo/Ted S. Warren)

But while the giant hornets are typically not harmful to humans, they do pose a great danger to bee populations, which have been declining in many parts of the world.

Chris Looney, an entomologist at the Washington State Department of Agriculture, has explained that hornets slaughter honeybees by literally biting their heads off.

The hornets then occupy honeybee nests for up to a week or more, feeding on the pupae and larvae.

Paul van Westendorp, an apiculturist in British Columbia, said the only actual nest of hornets found in North America was discovered on Vancouver Island and destroyed.

The two hornets spotted in Blaine, Washington, were found in December. One was alive and flew off, Westendorp said, while the second was dead.

News of the “murder hornets'” arrival in the United States has set the internet abuzz in recent days, with many lamenting that it couldn’t have come at a worse time, referring to the coronavirus pandemic.

“Now I gotta worry about a hornet killing me! the world is ending,” said one Twitter user.

“Guys, I think we are going to be okay as long as someone tells the Murder Hornets about the 6ft social distancing rule,” quipped another user. “With a name like that, I’m sure they are reasonable.”