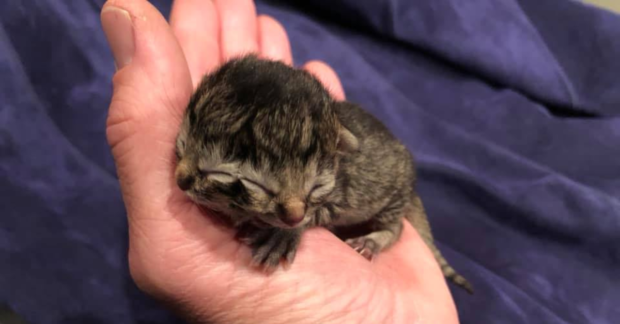 A kitten born with two faces passed away yesterday, May 24, just three days after it was born in Oregon, United States.

The young feline, named Biscuits and Gravy, was born with five siblings under the care of Kyla and BJ King, according to CBS-affiliate KOIN last Thursday, May 21.

The couple announced their family’s loss yesterday through a Facebook page dedicated to their pet.

“Kyla gave up [three-and-half] days of her life to put all of her efforts into saving him,” the page noted alongside a photo of the kitten, which was taken an hour before it died.

This photo was taken about an hour before Biscuits died. Kyla gave up 3 1/2 days of her life to put all of her efforts…

“He was born with the longest of odds and by living nearly [four] days, he beat those odds,” it added.

Kittens born with two faces are called “Janus cats,” according to a 2014 report by National Geographic. The term comes from the Roman god Janus, usually depicted as having two faces.

These felines do not “live very long due to health problems related to their deformity,” Leslie Lyons of the University of Missouri’s Department of Veterinary Medicine and Surgery said in the report. She also pointed out that the cause of the kitten having two faces is not completely understood but there is a “variety of genetic mechanisms that could cause it.”

Meanwhile, the fan page of Biscuits and Gravy assured people that the kitten was eating well before he passed away. However, despite his meals, “he just didn’t grow.”

“It’s hard work for a little guy like him to support a large head with two complete faces,” it pointed out.

Hours after, Kyla expressed her gratitude to those who supported and wished Biscuits and Gravy well.

“I want to thank everyone so much for your kindness and love,” she said in a separate post. “This story has been a story of life and how very precious it is, whether days or years, whether animal or human, life is so very precious and every single life is unique.”

I want to thank everyone so much for your kindness and love. This story has been a story of life and how very precious…

“I feel so blessed to be a part of the story of Biscuits and Gravy and how he brought joy and hope to so many people. We loved him and cared for him and he passed in my hands,” she added. “We are thankful to still have his siblings to care for and they are just as precious.” Ryan Arcadio/JB