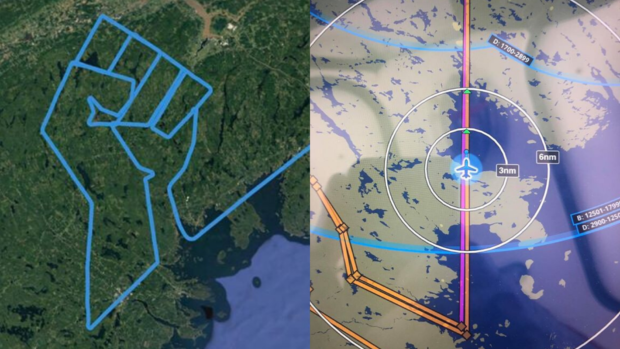 A pilot created a raised fist in the air using an airplane and a flight-tracking app to honor George Floyd, following his death last month.

Dimitri Neonakis made the tribute while flying over the province of Nova Scotia in Canada. He posted photos of the raised fist on his Facebook page last Friday, June 5, alongside a photo of Floyd.

“Today I flew this 330 nautical mile flight pattern which took the shape of a movement symbol which I respect and support,” he added, referring to the fist.

“While I was up there moving around free, the words of George Floyd ‘I can’t [b]reathe’ came to mind a few times, a stark contrast,” Neonakis noted.

He then stated that he sees a world of “one race in [multicolors]” while urging others to end racism. The flight took a total of 2.5 hours to complete using a single-engine Cirrus SR22, the pilot told Canada’s Global News on the same day.

Meanwhile, aviation software company FlightAware also tracked Neonakis’ flight in real time and posted a clip of it on Twitter.

HAPPENING NOW In the skies over Halifax, Canada. https://t.co/v3ZPufQyEs pic.twitter.com/qdn459NpUz

Prior to the tribute, Neonakis created other drawings for people using his aircraft. Last month, he made an image of a mother holding a newborn to celebrate his daughter Ereni Cessford, who is expecting her first child next month. Aside from the time it takes to fly the plane, the report stated that the pilot needs an additional four or five hours to draw out the flight plans before taking to the skies.

Neonakis also expressed that his drawings comfort others during these unprecedented times.

“People like it. And as long as people like it, I’ll keep flying,” he was quoted as saying.

As to why he made a tribute for Floyd, he said: “I want to get up there and spread the word of how I feel. I’m not doing political messages… it’s how I feel. And other people, they do it through their own means.”

Protests and looting broke out across the United States after Floyd died while in police custody in Minneapolis, Minnesota, on May 25. Ryan Arcadio /ra