From space, Russian cosmonauts fight chess grandmaster to a draw 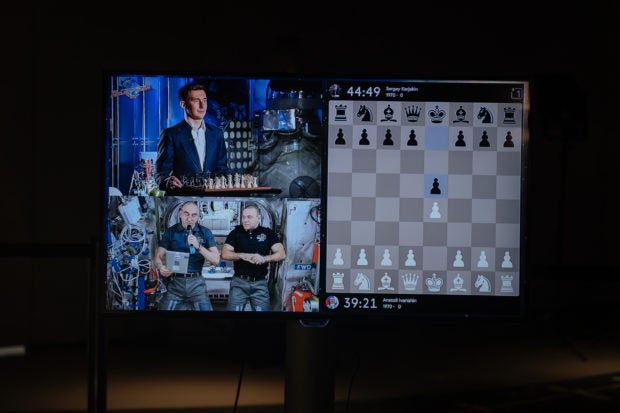 Two Russian cosmonauts aboard the International Space Station played chess against an Earth-bound grandmaster on Tuesday, in a celebration of the first such game half a century ago.

The game was broadcast live and ended in a draw after about 15 minutes.

It was organized by the space agency Roscosmos and the Russian Chess Federation to celebrate the 50th anniversary of the first Space-Earth game of chess played on June 9, 1970.

“It’s a huge honor for us not to lose to a grandmaster,” Ivanishin said, while Vagner added that U.S. astronauts on the ISS watched the game and gave tips.

Karyakin, who played from Moscow’s Museum of Cosmonautics, said he was jittery during the game and could not fall asleep until 4 a.m. on the night before the match.

“They played well,” he said. “I can say that the human brain functions very well in space, and I have seen this today.”

At the age of 12 years and seven months, Karyakin became the world’s youngest-ever grandmaster.

Ivanishin, Vagner and U.S. astronaut Chris Cassidy arrived on the ISS in April.

On May 31, they were joined by U.S. astronauts Bob Behnken and Doug Hurley on the first manned private flight to the ISS.

SpaceX made history by becoming the world’s first commercial company to send humans to the ISS, leading Russia to lose its long-held monopoly on space travel. NVG