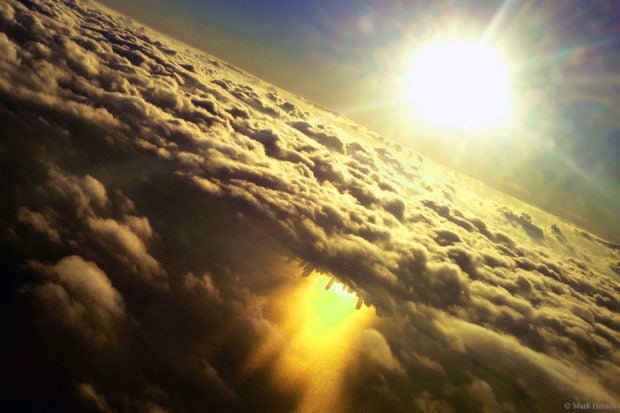 “Inverted City Beneath the Clouds”. Image: Mark Hersch via NASA

A mind-boggling photo of what appears to be an upside-down city beneath the clouds has been featured as the National Aeronautics and Space Administration’s (NASA) Astronomy Picture of the Day on June 24.

Despite being unaltered, the photo looked as if it were a still from a sci-fi movie defying the laws of gravity, among other scientific laws. The photo was taken by photographer Mark Hersch from an airplane over Illinois, United States back in 2014.

This optical illusion is no complicated mirage, however, as it turns out to simply be caused by the Chicago City’s reflection on Lake Michigan and a perfectly timed shot that was taken as clouds block the actual city from the camera’s view.

“How could that city be upside-down? The city, Chicago, was actually perfectly right-side up. The long shadows it projected onto nearby Lake Michigan near sunset, however, when seen in reflection, made the buildings appear inverted,” NASA explained.

“The Sun can be seen both above and below the cloud deck, with the latter reflected in the calm lake,” the agency added.

Hersch also took to Twitter back in 2014 to share a physicist’s illustration trying to explain how the fascinating photo was captured.

@KelleeJohnson A physicist who saw it drew this diagram & asked me if this is how shot it. Pretty much nailed it! pic.twitter.com/9ETVADvPLC

NASA also pointed out that “as a bonus,” those interested can actually spot another airplane flying over the clouds and was likely to be approaching Chicago’s O’Hare International Airport, the same as Hersch’s plane. NVG