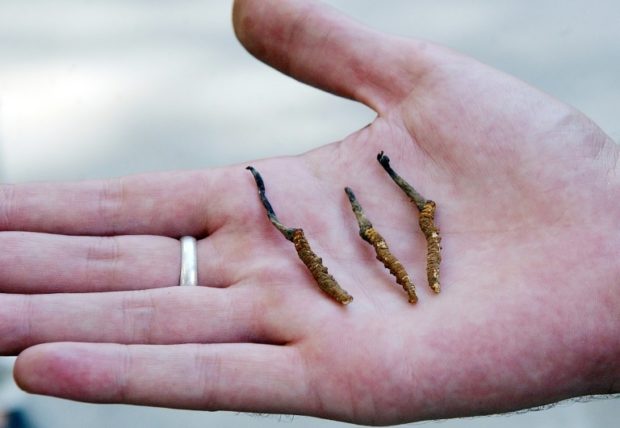 A parasitic fungus that grows inside the ghost moth caterpillar and then kills its host by bursting through its head is itself threatened with extinction, the International Union for Conservation of Nature (IUCN) said Thursday, as demand surges for Chinese medicine’s “Himalayan Viagra.”

Ophiocordyceps sinensis, the world’s most expensive fungus, only grows on the Tibetan Plateau where it has become the main source of income for some communities.

It has been prized as a health tonic and aphrodisiac in Chinese traditional medicine for centuries, but demand has intensified since the 1990s.

Overharvesting has slashed populations by at least 30 percent in the last 15 years, according to the International Union for the Conservation of Nature, which has now listed it as “vulnerable” to extinction in its directory of threatened animal and plant species.

“This is one of the few documented cases of a fungus being threatened by overharvesting,” said Gregory Mueller, who heads up IUCN’s Fungal Conservation Committee.

He said there needed to be a sustainable harvest program to protect both the fungus and the communities that rely on it for their incomes.

Ophiocordyceps sinensis is also known as the Caterpillar Fungus, or Yarchagumba, which means “summer plant, winter insect” in Tibetan.

It is only found in meadows above 3,500 meters (11,550 feet) and forms when the fungus lodges itself in caterpillars and slowly kills them.

To grow, it needs a specific climate with winter temperatures below freezing but where the soil is not permanently frozen.

Every spring in Nepal, houses and schools empty as thousands of villagers make the sometimes perilous journey up into the mountains to collect it.

But this year Kathmandu banned the annual trek to harvest the fungus during its lockdown for the coronavirus pandemic.

No definitive research has been published proving its beneficial qualities, but Chinese herbalists believe it boosts sexual performance, hence the nickname “Himalayan Viagra”.

Boiled in water to make tea, or added to soups and stews, it is said to cure a variety of ailments from fatigue to cancer, to kidney and lung problems.

Researchers say it can, ounce for ounce, fetch up to three times the price of gold in Beijing. People in China and Nepal have in the past been killed in clashes over Yarchagumba. IB

Man finds caterpillars in broccoli, raises them to become butterflies