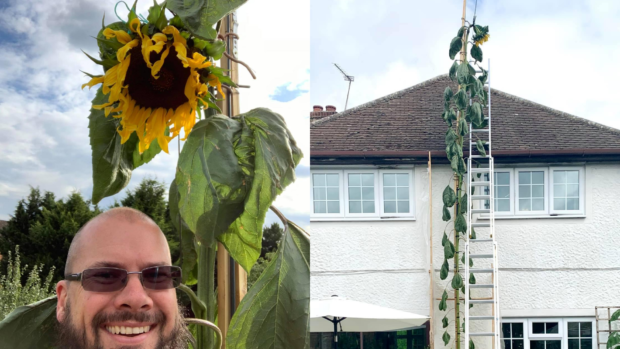 One father grew a nearly 20-foot-tall sunflower to fulfill his 4-year-old son’s request for one that was as tall as their home.

Douglas Smith planted the flower’s seed in their house in Hertfordshire, United Kingdom, back in March while the country was under lockdown. His son Stellan was overjoyed last week upon seeing that the plant was already taller than their home, as per The Sun last Wednesday, July 29.

Smith purchased the seed from John Butler who is known for growing the tallest sunflower in North America. It measured more than 26 feet and 8 inches in height.

“I’m not sure specifically what variety of sunflower this is, but it’s a bit like a thoroughbred horse,” he said in a Unilad report on July 30.

“But the flower will also reward any TLC you are able to give it,” Smith added. “I go out to feed and water it a couple of times a day.”

Smith also posted photos of himself and Stellan with the flower on his Twitter page last week.

“Giant sunflower alert! I think that’s about as far as it’s likely to go? The [4-year-old] said he wanted a giant,” he said.

He added that it measured 21 feet and 3 inches over the curve to the tip of the sepal but noted it was “just shy of 20 [feet] in absolute terms.”

Giant sunflower alert! 🌻 I think that’s about as far as it’s likely to go? The 4 year old said he wanted a giant one…

The giant plant is placed in a 20-inch-tall and 2-feet-deep wooden container, and is rigged to a wooden pole to stop it from bending under its own weight. Due to the flower’s towering height, Smith has to climb a ladder to tend to it.

While the plant has already exceeded Stellan’s expectations, Smith said that it may still grow by another inch or two.

“It’s flowering at the moment – there’s probably another week or so of flowering left, and then I’m hoping to leave it standing for as long as I can, to collect most of the seeds,” he was quoted as saying.

Smith also mentioned that Stellan’s classmates at his nursery probably do not believe him when he says that his family has a giant sunflower.

While Smith’s plant has reached a massive height, it is not the tallest one in Britain. That record is held by Richard Hope who set it in 2012 with a 26-foot-tall sunflower.

Along with the giant sunflower, Smith has previously grown an enormous pumpkin and tomato. According to the report, the tomato weighed nearly 3 kilograms. Ryan Arcadio/JB

Father wins lottery on same day his baby is born