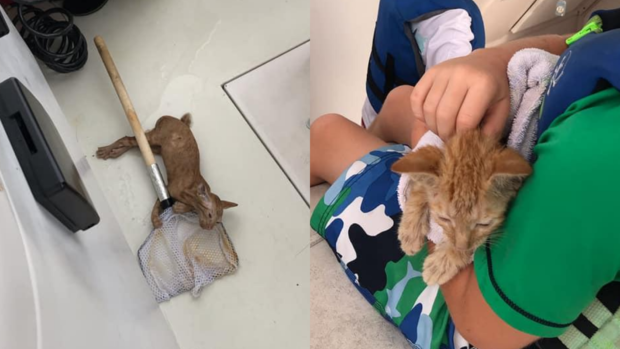 A fishing crew is being hailed as heroes after rescuing a kitten that had been pulled into the ocean by a tide, last Thursday, July 30.

The group from Still Flyin Charters was on a trip in the Gulf of Mexico near Alabama, USA, when they saw the little cat struggling in the water.

They initially thought the animal was a sea turtle, as per Fox-affiliate KSAZ-TV the day after. However, the crew eventually realized it was a cat upon getting a closer look.

The group then turned around and removed the kitten from the water. Following the rescue, they posted photos of the small feline on Facebook.

“Our catch of the day,” Still Flyin Charters said. “Poor little guy was sucked out by the tide.”

Our catch of the day. Poor little guy was sucked out by the tide. We caught him just outside the pass in the gulf. He…

The soaked kitten clung onto a net on the boat’s floor after being brought aboard. Moments later, it was wrapped in a towel and held by children of the crew.

“We caught him just outside the pass in the gulf. He was struggling to stay up,” Still Flyin Charters added. “We caught him, brought him in the boat and let him recover.”

Steve Crews, owner and operator of Still Flyin Charters, told the news outlet that the animal is a feral or wild cat. While it has no owners, Crews noted that one of the crew members had already found a new home for the kitten.

However, Crews and his wife later decided to take care of it themselves after the animal refused to go with the crew member.

The kitten is still easily scared, but accepts the food and water the couple gives it, as per report. Crews and his wife also have not identified whether the feline is a male or female.

Though they have yet to decide on a name for their “catch of the day,” Crews prefers to call it Sharkbite, while his wife wants to name it Lucky. Ryan Arcadio  /ra