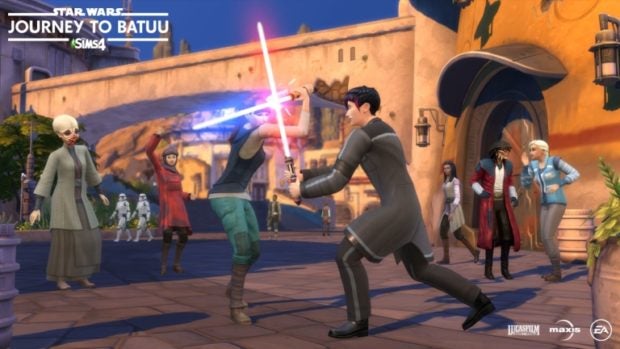 Announced at Gamescom 2020, the new “Star Wars” expansion pack for “Sims 4” will be available for Mac and PC, Steam, Xbox One, PlayStation 4 on Sept. 8. Fans of the legendary saga will be plunged into the world of Batuu and will even be able to take part in lightsaber training.

Called “The Sims 4 Star Wars: Journey to Batuu”, the new pack for the cult video game looks set to be a hit among “Star Wars” fans. The first images from the pack were unveiled during Gamescom 2020 as well as on the Sims 4 Twitter account.

In a galaxy far, far away, deep into the Outer Rim, the world of Batuu awaits your Sim. The Sims 4 Star Wars Journey to Batuu Game Pack is available September 8! Create your unique #TheSimsxStarWars story: https://t.co/OrpnA7VfUK#JourneyToBatuu pic.twitter.com/t5npF4Fmfh

Players will be able to choose between being part of the Resistance or joining the forces of the First Order. They will be able to build their own droid and lightsaber before beginning their training to gain fitness skills. Sims will be also able to complete missions to earn reputation points.

Depending on the path they choose, whether it’s close to the Resistance or on the dark side of the force, the Sims will have more or less conflict with the inhabitants of Batuu. It may be possible to attend Rey’s training or to see Kylo Ren in the middle of a tantrum, Vi Moradi on a mission and Hondo Ohnaka in the middle of a cheating session in a game of sabacc, outlines the official release.

The good news is that players will be able to take their droids back with them to their original worlds as well as decor and recipes that they find in the world of Batuu. JB