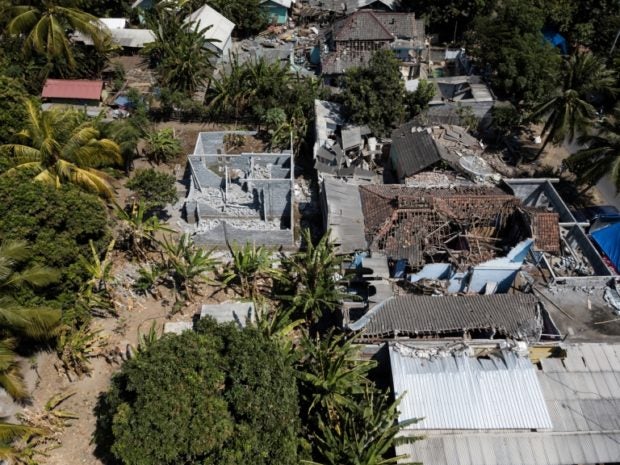 The Indonesian island of Lombok was hit by an earthquake in 2018. Image: AFP/Fred Dufour via AFP Relaxnews

A team of researchers has succeeded in creating an artificial intelligence (AI) algorithm that can identify changes in the earth’s crust that occur up to three months before an earthquake.

On Aug. 21, Indonesia was struck by a 6.9-magnitude earthquake. Fortunately, it was a deep-focus temblor which did not result in loss of life or material damage. However, the country, which is located on the Pacific Ring of Fire, has an extensive record of highly dangerous seismic activity. As recently as 2018, the archipelago was struck by a 7.5 magnitude earthquake, which was part of a series of quakes and tsunamis that killed thousands in the country.

Scientists are now wondering if devastation on this scale could be avoided using systems developed by artificial intelligence, among them a team of researchers from the French École Normale Supérieure (ENS), which recently announced the discovery of an AI algorithm to predict seismic events in the journal Nature Communications.

A focus on ‘slow’ earthquakes

This latest research project adopted a simple approach that involved feeding a deep learning machine with large amounts of seismic data recorded before quakes occurred. The goal was to develop an algorithm with the ability to detect recurrent phenomena that lead up to a significant seismic event.

The machine was initially trained using laboratory earthquakes, before being adapted to look for signs of “slow” earthquakes under Vancouver Island, Canada. Seismic events of this kind, which share many characteristics with more devastating fast earthquakes, can last for a period of weeks or even months. Given that they are slow, they hardly generate any seismic waves and as a result do not usually cause much in the way of damage. At the same time, the fact that they take place over a long period makes them easier to analyze.

The algorithm created a list of characteristics that precede the appearance of earthquakes. Among them, the researchers noted an exponential increase in seismic energy prior to rupture, as if more and more tiny seismic waves were being emitted from the seismic zone. These crackles were noticeable up to three months before a slow earthquake would usually be detected, which means that the advent of these phenomena could be predicted well in advance.

The AI agent also found that the tremors start on a very small scale and then accelerate before becoming visible to the naked eye, as they do in fast earthquakes.

What about detecting major earthquakes?

As it stands, there has been little progress towards this goal.

“If you look at this question in terms of time scales: a slow earthquake lasts for a month, and preceding signals are detectable for 100 days (a little over three months) in advance of the event. A high magnitude major earthquake lasts for 10 to 100 seconds, which means that preceding signals should be observed 30 to 300 seconds before it takes place…,” said Claudia Hulbert and Romain Jolivet in a layman’s explanation of their work published in The Conversation.

However, as it stands none of this has been proven, and perhaps more to the point, what would we do with a warning that comes just five minutes before a catastrophe? Hugely destructive earthquakes are also relatively rare, which means that researchers do not have enough seismic data to train an AI to predict them. Further study of the mechanics of seismic events so that they can be modeled by computers and eventually predicted appears to be the most promising research strategy for the moment. JB

Breaking 6 myths on disaster preparedness, and making every Filipino even more resilient

TOPICS: AI, algorithms, Artificial Intelligence, Canada, Earthquake, Indonesia, ring of fire, Seismology
Read Next
A profile picture with an iPhone is a lot sexier than one with a BlackBerry, says study
EDITORS' PICK
‘Pepito’ slightly intensifies as it makes landfall over Aurora
Smart brings KCON:TACT 2020 Season 2 to Filipino fans
Storm sends Mayon lahar blocking roads in Albay town
Grand Hyatt Manila all set to welcome back guests
’Pepito’ prompts suspension of some classes, work on Wednesday, Oct. 21
Boy Bondat: Siomai King’s newest innovation
MOST READ
’Pepito’ prompts suspension of some classes, work on Wednesday, Oct. 21
Velasco says he was ‘ostracized’ during Cayetano leadership
Dogs ‘on death row’ up for adoption in Bulacan pound
Chinese arrivals since 2017 higher than QC population — Hontiveros
Don't miss out on the latest news and information.