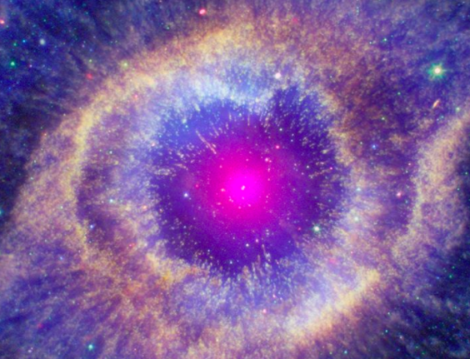 A composite photo of the Helix Nebula (Image: Instagram/@nasa)

The US National Aeronautics and Space Administration (NASA) is treating the public to photos of cosmic spectacles taken by humanity’s “eyes” from around the globe.

Using data from several missions and observatories, NASA introduced a “‘multiwavelength’ approach to astronomy,” which the space agency says is “crucial to getting a complete understanding of objects in space.”

X-ray data from NASA’s Chandra observatory and several other telescopes that capture different wavelengths of light were combined into composite images that show off the wonders of space.

NASA took to Instagram earlier today, Sept. 4, to share some of these stunning images while also providing brief explanations to the public.

The second one, meanwhile, shows the Cartwheel Galaxy, which resembles a bullseye. NASA explained that its appearance is “partly due to a smaller galaxy that passed through the middle of this object.”

“X-rays from Chandra (purple) show disturbed hot gas initially hosted by the Cartwheel galaxy being dragged over more than 150,000 light years by the collision. Optical data from Hubble (red, green, and blue) show where this collision may have triggered the star formation,” NASA stated.

The third photo shows a majestic view of Eta Carinae, a volatile system that has two massive stars orbiting each other, according to NASA.

The last image, meanwhile, featured a supernova—SN 1987A to be specific—found in the Large Magellanic Cloud. It is also one of the “brightest supernova explosions in centuries,” as per NASA.

“The Chandra data (blue) show the location of the supernova’s shock wave interacting with the surrounding material about four light years from the original explosion point. Optical data from Hubble (orange and red) also show evidence for this interaction in the ring,” the space agency explained.

Other than the four photos, NASA also has two additional composite images that it shared on its official website earlier today.

Made possible through the said “multiwavelength approach,” NASA in the compilation noted that these composite images “demonstrate the possibilities when data from across the electromagnetic spectrum are assembled.”  /ra