Bill Gates mourns father’s death: ‘He was everything I try to be’ | Inquirer Technology
Close
menu
search

Bill Gates mourns father’s death: ‘He was everything I try to be’ 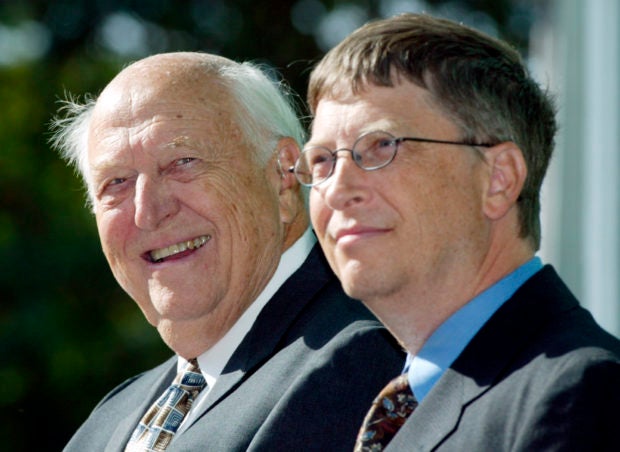 Microsoft co-founder and philanthropist Bill Gates paid tribute to his father, William H. Gates Sr., following his death on Sept. 14 at the age of 94.

He passed away due to Alzheimer’s disease, The Washington Post reported today, Sept. 16.

The former lawyer peacefully died in his home surrounded by his family, Gates Jr. said in his blog on Sept. 15.

“We will miss him more than we can express right now. We are feeling grief but also gratitude,” Gates Jr. expressed.

He then reflected on his father’s influence on his and his sisters’ lives. He stated that they were “very lucky” to have been raised by their parents.

Gates Jr. also credited their “unconditional love” as one of the reasons why he felt comfortable leaving college to start Microsoft with Paul Allen.

“I knew they would be in my corner even if I failed,” he said.

Along with their love, Gates Jr. spoke about his father’s influence on his drive and philanthropy.

“Throughout my childhood, he and my mom taught me by example what generosity looked like in how they used their time and resources,” he stated.

The philanthropist added that the Bill & Melinda Gates Foundation “would not be what it is today” without his father.

“More than anyone else, he shaped the values of the foundation,” Gates Jr. said. “He was collaborative, judicious, and serious about learning.”

Aside from his moving tribute, Gates Jr. also posted a short video featuring photos of his father.

Beyond their work in the organization, he proudly pointed out his dad’s “profoundly positive influence” on his role as a husband to Melinda and a father to their kids. He then looked back on a letter his dad gave him for his 50th birthday, which he calls one of his most prized possessions.

“Over time, I have cautioned you and others about the overuse of the adjective ‘incredible’ to apply to facts that were short of meeting its high standard,” Gates Sr. said in the message. “This is a word with huge meaning to be used only in extraordinary settings. What I want to say, here, is simply that the experience of being your father has been… incredible.”

Gates Jr. described his experience of being his son’s father as “incredible” as well.

“People used to ask my dad if he was the real Bill Gates. The truth is, he was everything I try to be,” he said. “I will miss him every day.” Ryan Arcadio /ra