Purr-fect petting: Study sheds light on how to bond with cats | Inquirer Technology

Purr-fect petting: Study sheds light on how to bond with cats 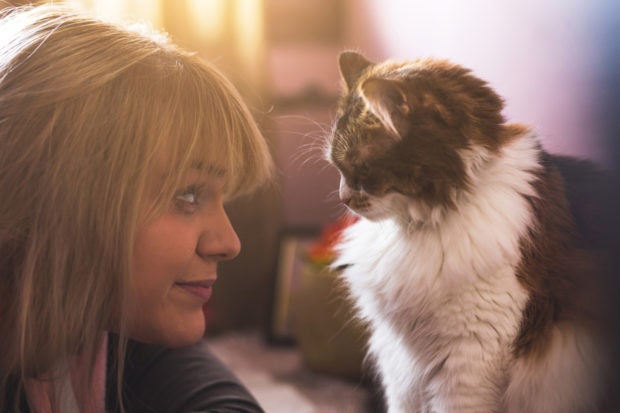 Your nicest smile may have a cute baby cooing with delight, but it won’t necessarily have the same effect on a cat.

Researchers at the Universities of Sussex and Portsmouth in the United Kingdom have studied cat-human interaction, offering some insight into how cat owners can bond with their pets.

A first experiment, overseen by a psychologist, included a total 21 cats and their owners. Each owner was asked to sit around a meter away from their pet, then to look at the cat and perform a slow blink — slowly closing and then opening their eyes.

According to the results of the study, cats were more likely to “reply” with a slow blink when their owner slow blinked at them, compared to when the owner was in the room but not doing a slow blink at their cat. The study authors explain that eye-narrowing movements in cats have some parallels with a genuine smile in humans.

A second experiment was then carried out, this time with a researcher unfamiliar with the cats. The expert interacted with 24 cats, either slow blinking at the cat or adopting a neutral face without direct eye contact.

The researcher then offered the cats a flat hand, palm facing upwards, to see if they would approach. The results showed that these cats were more likely to slow blink when the unfamiliar experimenter slow blinked at them, compared to when they kept a neutral expression.

According to the study’s lead author, Dr. Tasmin Humphrey: “Understanding positive ways in which cats and humans interact can enhance public understanding of cats, improve feline welfare, and tell us more about the socio-cognitive abilities of this under-studied species.”

Professor Karen McComb, from the School of Psychology at the University of Sussex, who supervised the work, concludes: “This study is the first to experimentally investigate the role of slow blinking in cat-human communication. And it is something you can try yourself with your own cat at home, or with cats you meet in the street.”

“It’s a great way of enhancing the bond you have with cats. Try narrowing your eyes at them as you would in a relaxed smile, followed by closing your eyes for a couple of seconds. You’ll find they respond in the same way themselves and you can start a sort of conversation.” IB