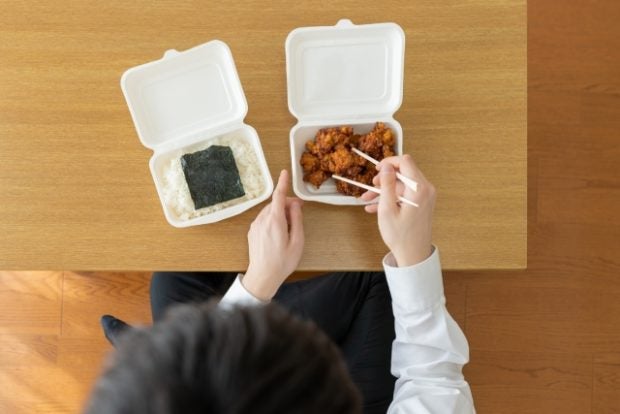 It’s gray and cold, and the closest restaurant to your office is at least a 10-minute walk away. If you don’t have an on-site cafeteria, the temptation to have lunch delivered to your desk can be very strong. But in China, it’s not so much bad weather as air pollution levels that could encourage workers to use food delivery services.

When repeated day in day out, this habit can considerably increase the amount of plastic waste created from take-out food packaging. So highlights a new study carried out by researchers at the National University of Singapore (NUS).

Published in the journal Nature Human Behaviour, the research focuses on China, which is one of the world’s biggest users of online food delivery platforms. The country counts around 350 million registered users and an estimated 65 million meal containers discarded each day. Office workers contribute over one-half of the demand for the services, the study states.

Carried out between January and June 2018, the study analyzed the lunch choices of 251 participants in their workplaces in three of the country’s often smog-filled cities: Beijing, Shenyang and Shijiazhuang. They were asked to submit photos of their meals (over 3,000 photos were sent).

To complement this, the researchers also analyzed 2016 order data from an online food delivery platform based in Beijing (3.5 million food delivery orders from about 350,000 users). Both sets of data were then compared to PM2.5 (fine particle) measurements during lunchtime hours from the air-monitoring network in the three cities.

Participants looked to food delivery when pollution was high

The researchers estimate that, on a given day, if all of China was exposed to a 100 micrograms per cubic meter increase in PM2.5 (as often happens in Beijing), 2.5 million more meals would be delivered, potentially using the same additional number of plastic bags or plastic containers.

“Our findings probably apply to other typically polluted developing-nation cities, such as in Bangladesh, India, Indonesia and Vietnam,” the researchers warn.

Is that enough to convince workers to come to the office armed with an array of Tupperware boxes? Or, alternatively, to brave the 10-to-15-minute walk between their workplace and a restaurant to enjoy the occasional meal outside the office, either with colleagues or alone. RGA