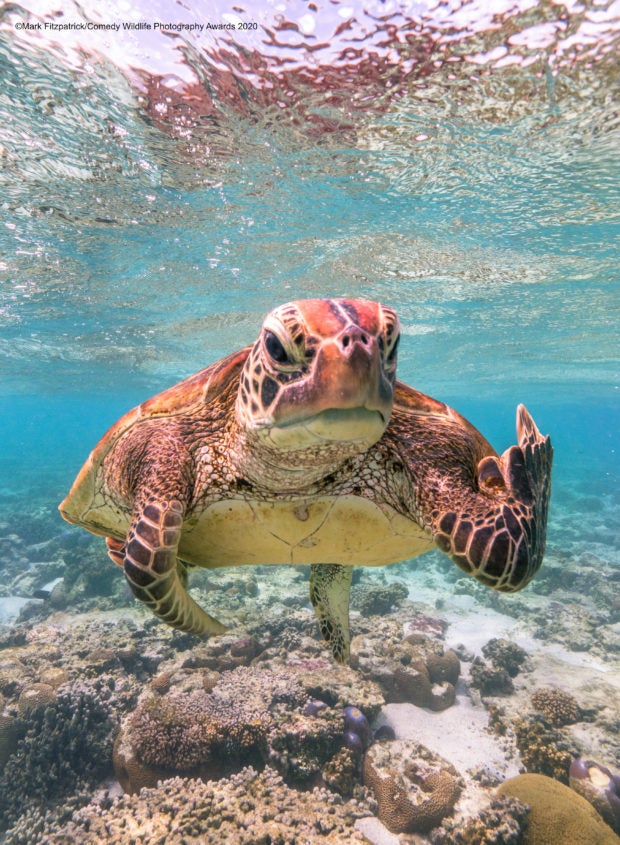 Despite the fierce competition, a photo of a turtle flipping the bird emerged victorious in the Comedy Wildlife Photography Awards this year, and rightfully so.

The hilarious photo of the seemingly grumpy turtle Terry, masterfully shot by photographer Mark Fitzpatrick, bested around 7,000 entries from all over the world.

The image was captured when Fitzpatrick was swimming with turtles off Lady Elliot Island in Queensland, Australia, the Comedy Wildlife Photography Awards said in a release.

Terry was actually pulling back his flipper as he swam towards the camera, but the shot’s perfect timing made it seem like he was indeed flipping the bird.

“It’s been amazing to see the reaction to my photo of Terry the Turtle flipping the bird, with Terry giving people a laugh in what has been a difficult year for many, as well as helping spread an important conservation message,” he added.

For the photo, Fitzpatrick wins a safari in the Masai Mara in Kenya with Alex Walker’s Serian, a unique handmade trophy from the Wonder Workshop in Tanzania, a photography bag from Think Tank and a brand new Nikon camera.

“Hopefully Terry the Turtle can encourage more people to take a moment and think about how much our incredible wildlife depend on us and what we can do to help them. Flippers crossed that this award puts Terry in a better mood the next time I see him at Lady Elliot Island!” Fitzpatrick noted.

The Comedy Wildlife Photography Awards was founded by photographers and conservationists Paul Joynson-Hicks and Tom Sullam. The global, online and free-to-enter photography competition aims “to highlight the extremely important message of wildlife conservation in an engaging and positive way.”

Photos of the 2020 finalists as well as the winners in different categories can be viewed in the awards’ official website. JB

Wildlife’s funny side captured by finalists of photography awards