The keyboard that lets you choose which keys you want, exactly where you want them 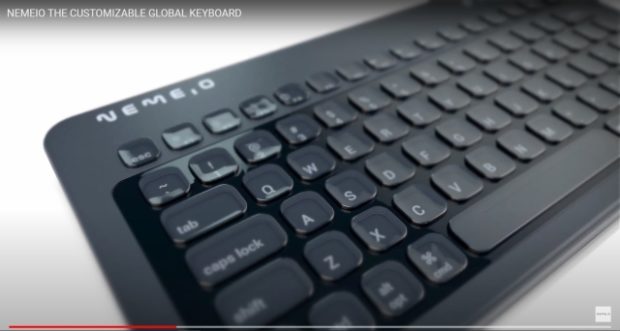 For several years, French startup Nemeio has been working on a keyboard prototype that is not only portable, but also fully customizable. Thanks to e-paper screen technology, the appearance of each key can be switched at any time, making the keyboard perfectly adaptable to different alphabets. Shortcuts are customizable too and can be set in relation to the software used, like office apps, photo editing and more. The keyboard is currently on sale via the Kickstarter crowdfunding platform.

The keyboard uses an e-paper screen to display and exchange the characters, icons or symbols users allocate to its 81 keys. It is designed for use anywhere, with cable or wireless (Bluetooth) connections. It is also billed as a universal solution, since it can theoretically be tailored to suit any language or alphabet. Each key is fully customizable, as well as the keyboard shortcuts.

Users can configure different keyboards for working in different languages, but also for the various software programs they work with. The same goes for shortcuts, making Nemeio, by definition, a unique keyboard in the world. It aims to let users switch from one configuration to another quickly and easily, as and when needed.

After being presented at CES, the famous Consumer Electronics Show held each year in Las Vegas, United States, the keyboard is now available to buy priced from $239 (around P11,500) via Kickstarter. However, first shipments are not expected before September 2021. When it launches officially, the keyboard is due to sell for $399 (around P19,300). CC