Nintendo Switch has personalized its ‘Year in Review 2020’ for users 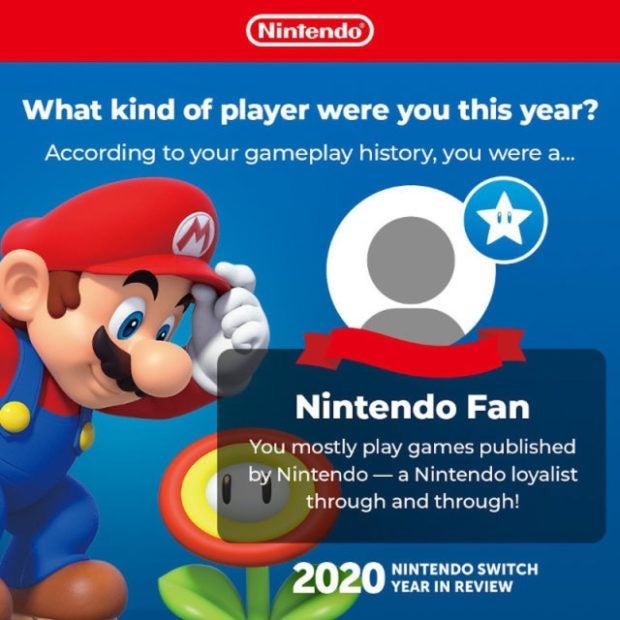 Nintendo Switch’s ‘Year in Review 2020’ lets you know what type of player you are in relation to the most popular games. Image: Courtesy of Nintendo via AFP Relaxnews.

It’s time to take stock of the past year — even for Nintendo Switch. Just like Spotify and TikTok, the Japanese company is allowing its users to look at their gaming year with the “Year in Review.” How long have you played video games on Nintendo Switch this year? What’s your favorite game? What is the day you played the most? A host of answers to discover.

It’s an ubiquitous trend at this time of year. Now it’s Nintendo Switch’s turn to give its players an overview of their activity during the extraordinary year that was 2020. While players in some countries may receive an email, North American players in the United States and Canada must go through the dedicated page on the official Nintendo website, as Engadget reports.

As in 2019, the summary of the year 2020 allows players to find out which Switch game required the most hours of play, as well as the number of hours played in total. This is a good way to see the impact that lockdown measures have had on the success of Nintendo Switch games.

This analysis of the past year also provides a list of the games most played by the user, which makes it possible to determine their status as a player. As indicated by Engadget, players can obtain, among others, the status of “Nintendo Fan” or “Getaway Traveler.”

But there’s a small downside to the “Year in Review” of 2020: it no longer indicates the first day of the year you used your Nintendo Switch or the first game you played the very first time on your system, unlike last year. Nevertheless, you will still be able to find out the day you played the most and your activity per month. The Nintendo Gold points earned over the years are also revealed. CC

Is Nintendo planning an upgraded Switch console for 2021?