All aboard! Europe's night trains get back on track | Inquirer Technology

All aboard! Europe’s night trains get back on track 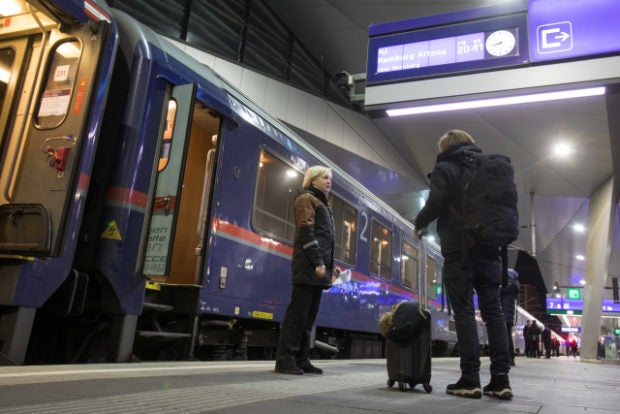 The state railways of Germany, Austria, France and Switzerland are joining hands with an investment fund of $605 million for the new sleeper train routes project. Image: Alex Halada/AFP

Thirteen night train lines are expected to be built or restored in the next four years across Europe. They will connect cities such as Berlin, Paris, Barcelona and Vienna, and help reduce the CO2 emissions caused by air traffic.

Night trains are picking up speed across Europe. On Tuesday, French newspaper Libération revealed that several new lines will open in the next four years.

In France, the Paris-Tarbes-Hendaye line is expected to commence operations in the next two years. Other routes mentioned by the Secretary of State for Transport Jean-Baptiste Djebbari include the Paris-Nice and Paris-Modane lines, said Libération.

In Europe, rail lines linking Vienna to Munich and then to Paris, Zurich to Rome, Berlin to Paris and Berlin to Barcelona will come into being between 2021 and 2024.

Since Dec. 13, new timetables on some rail routes offer new opportunities. You can now depart from Prague and reach Przemyśl, Poland in 10 hours and 50 minutes, or Berlin and Krakow in 7 hours. However, there is currently only one train per day, and for trips requiring travel at night, most openings have been postponed to 2021 due to the pandemic.

In an article published in The Guardian, Nicky Gardner, co-author of Europe by Rail: the Definitive Guide, describes the new routes that make it possible to travel across Europe, such as the sleeper train that will link Amsterdam to Vienna in 13 hours and 40 minutes. He also mentions the train that will connect Berlin to Stockholm via Hamburg, whose first trips are scheduled to begin on March 31, 2021. It will initially be operational only at weekends, and then daily from June 5.

Taking the train: the eco-friendly alternative

A train is 27 times less polluting than an airplane according to a calculation based on data from the French Agence de l’Environnement et de la Maîtrise de l’Énergie (Agency for Ecological Transition).

According to Greenpeace, a trip by train emits 10 times less CO2 than the same trip by car. And even less than a journey by plane.

Rail is proving to be a viable ecological alternative to replace short and medium-distance travel. It should also be favored for long distances, especially with the establishment of all these night train lines. NVG

In the Netherlands, cycling benefits the environment and life expectancy

Europeans have become more sedentary in the last 15 years