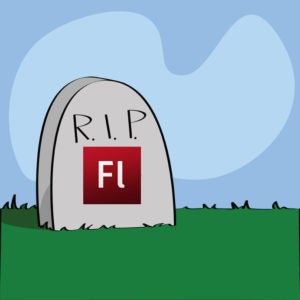 To end 2020, Adobe Flash Player has finally bid goodbye to internet users as its services will no longer be available from now on.

Adobe has stopped distributing and updating the Flash Player plugin, which allowed generations of netizens to play thousands of games and watch videos since the early days of the internet.

Since 1996, Flash Player had been widely used by gaming and video-sharing websites to provide internet users access to their contents relatively quickly back then.

For one, Facebook had its plethora of games relying on Flash Player, such as the popular internet pastime “Farmville,” which used to have around 30 million daily players.

The said game, among many others, also has since had its final bow just right at the end of 2020, as Flash Player was laid to rest.

Along with Facebook, tech giants Microsoft, Apple and Mozilla have announced back in 2017 that they will gradually stop supporting Flash Player until its end-of-life (EOL) date of Dec. 31, 2020.

Adobe will no longer issue security updates for the said plugin and has advised users to uninstall it from their devices. Starting Jan. 12, it will also no longer allow videos and animations to run using it.

“Adobe does not intend to issue Flash Player updates or security patches after the EOL Date. Adobe strongly recommends that all users uninstall Flash Player immediately,” Adobe said in a release.

Despite its many uses, Adobe Flash Player had been plagued with security issues over the years and had trouble keeping up with the era of smartphones, as per BBC yesterday, Jan. 1.

Adobe also noted that Flash Player’s death came as open standards such as HTML5, WebGL, and WebAssembly “have continually matured over the years and serve as viable alternatives for Flash content.”  /ra