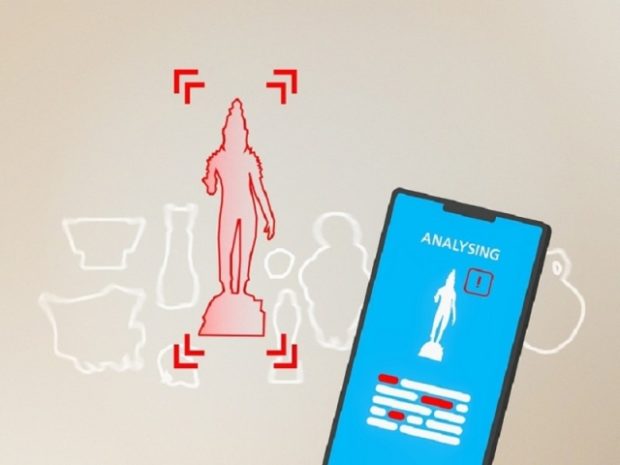 Tracing the origins of antiquities can be an arduous task for police forces and customs authorities, who can be misled by fake documentation. In July, UNESCO raised the alarm after receiving numerous reports of “an illicit trafficking scam in African cultural artifacts, which are being sold to unsuspecting buyers, thanks to the entirely fake UNESCO stamp they come with.”

Faced with the scale of the problem, researchers at the Fraunhofer-Gesellschaft Institute have developed the KIKU application to help authorities determine whether a cultural artifact originates from a looted archeological site or has been illegally acquired.

The way it works is simple: customs agents take photos of a suspicious artifact from different angles. These are then analyzed by the application to search for similar artifacts and relevant information to evaluate its authenticity, such as region of origin or date of creation. KIKU then compares these elements to those in official databases of stolen cultural objects, and an alarm sounds if there is a match. Currently, Interpol documents more than 51,000 stolen cultural objects from 134 countries.

“The app can learn distinctive scripts or shapes. If we have enough examples, the app can recognize them. The more images there are, the better it works,” the head of media security and IT forensics at the Fraunhofer-Gesellschaft Institute, Martin Steinebach, told The Art Newspaper.

The KIKU app has won funding of up to 500,000 euros as part of the German federal government’s national strategy for culture and media. Its development follows the ILLICID research project, which examined the trade in antiquities and cultural property in the country. Its researchers found that local authorities did not have the necessary expertise to combat this kind of trafficking, noting that effective technological tools could “significantly relieve the burden on customs authorities, experts and investigatory agencies.”

The KIKU app is rooted in this idea, although it cannot replace the need for countries to have their own specialist services fighting the illegal trade in cultural property. In 2018, the UN invited all its member states to create entities dedicated to the protection of cultural heritage, with the help of Interpol, while underlining the importance of linking up national databases of stolen artworks.

These cooperative efforts are essential given the booming trade of historical objects and antiquities on social media. Several ATHAR Project studies revealed that Facebook groups were facilitating the trade in objects stolen in conflict zones such as Syria, Iraq and certain North African countries. Following these revelations and years of talks with UNESCO, the platform changed its conditions of use in June this year to “prohibit the exchange, sale or purchase of all historical artifacts on Facebook and Instagram.” RGA