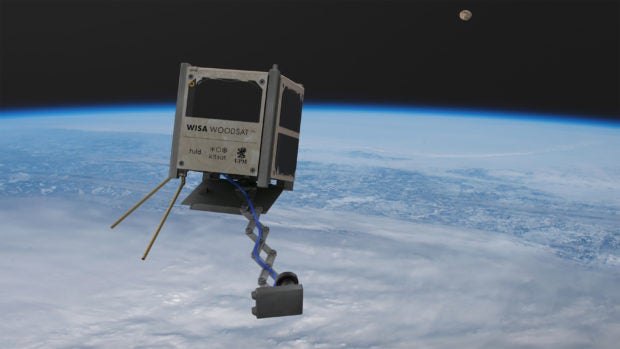 A rendering of the WISA Woodsat in orbit (Image: UPM Plywood)

The world’s first wooden satellite is set to go to space this year thanks to the efforts of Finnish company UPM Plywood, Arctic Astronautics and Huld.

The wooden nanosatellite, named WISA Woodsat, is expected to “go where no wood has gone before” by the end of 2021, as per a release on May 12.

It was created to gather data on the “behavior and durability of plywood over an extended period in the harsh temperatures, vacuum and radiation of space in order to assess the use of wood materials in space structures.”

Artic Astronautics, which designed WISA Woodsat, based its structure after its Kitsat educational satellite, according to the release.

“UPM’s mission as a company is to create a future beyond fossils. WISA Woodsat is made of plywood and it carries a profound message of replacing fossils with renewable wood-based materials also in very demanding applications. Houston, we have a solution,” said Ari Voutilainen, the space project manager for UPM Plywood.

WISA Woodsat measures around 10 by 10 by 10 cm and weighs 1 kg, according to UPM. It is equipped with several onboard sensors including two cameras that will be used to monitor the WISA Birch plywood.

One of the cameras will also be mounted to a selfie stick to allow for exterior imaging, while the wooden nanosatellite also has a novel sensor suite provided by the European Space Agency (ESA).

“The Wooden satellite with a selfie stick will surely bring goodwill and raise smiles, but essentially this is a serious science and technology endeavor,” said. WISA Woodsat mission manager Jari Mäkinen of Arctic Astronautics.

WISA Woodsat’s only non-wooden materials are the said metal selfie stick and its corner aluminum rails used for space deployment, the ESA said in a separate release on June 10.

By the end of this year, the nanosatellite will be launched to polar orbit from New Zealand’s Mahia Peninsula launch complex, using Rocket Lab’s Electron launch vehicle, according to the release.

WISA Woodsat is expected to orbit the Earth at an altitude of 500 to 550 km, and will complete a full orbit every one hour and 30 minutes.

Just last week, on June 12, a development prototype of the WISA Woodsat was launched to the stratosphere using a balloon. It was conducted at the Heureka Science Center Finland to test the satellite’s camera and communications equipment.

The said test flight was successful and the prototype was hoisted at an altitude of around 31.2 km and remained on the air for almost three hours.  /ra

Lacson, Sotto postpone official launch of tandem for 2022 due to Delta threat