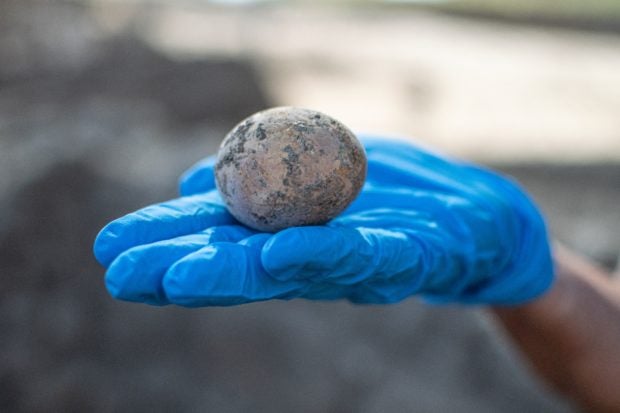 An intact chicken egg dating back to roughly 1,000 years ago has been discovered by researchers in Israel, but the delicate object cracked while being studied by scientists.

The discovery was made by archaeologists during an excavation in an ancient pit in Yavne, Israel, as announced by the local museum Israel Antiquities Authority (IAA) on its Facebook page last Wednesday, June 9. It showed photos of the said egg, along with other discoveries from the excavation.

“Eggshell fragments are known from earlier periods […] but due to the eggs’ fragile shells, hardly any whole chicken eggs have been preserved. Even at the global level, this is an extremely rare find,” Dr. Lee Perry Gal of the IAA said. Gal also noted that researchers usually find ostrich eggs during their digs, since those kinds of eggs have thicker shells that help with preservation.

Archaeologist Alla Nagorsky explained that the unique find may have been due to the egg being in an oxygen-free environment surrounded by waste.

“The egg’s unique preservation is evidently due to the conditions in which it lay for centuries, nestled in a cesspit containing soft human waste that preserved it,” Nagorsky said.

A Cracking Find >>> Intact chicken egg dating from roughly 1,000 years ago was revealed during archaeological…

Unfortunately, the egg cracked despite supervision from a conservationist and the scientists’ “extreme caution” in removing it from the excavation area. Gal explained that most of the egg’s contents leaked out due to the small crack.

“Only some of the yolk remained, which was preserved for future DNA analysis,” she said. Despite the accident, the museum noted that the egg was restored to its original state through the museum’s organics laboratory.

The researchers also had some interesting finds from the same pit as the egg, including bone dolls that were considered as toys many years ago. JB