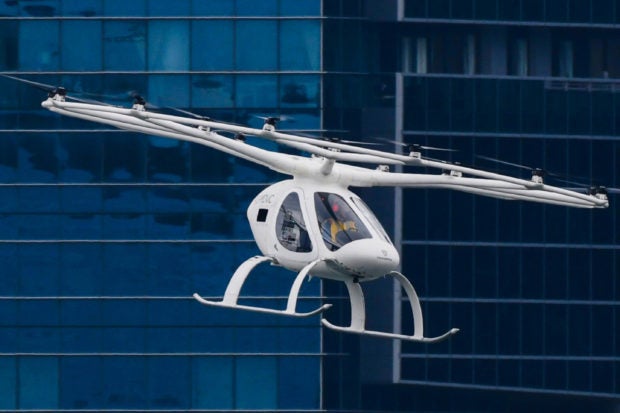 German company Volocopter has succeeded in an important step. The  European Union Aviation Safety Agency (EASA) authorization issued on June 24 for its VC200-2 UAV will allow the firm to carry out test flights at the Pontoise airfield, located in the Val d’Oise region outside of Paris.

This is excellent news for the manufacturer, after the demonstration flight of its Volocopter 2X at the Paris Air Forum. This is the first such authorization from the European Union Aviation Safety Agency, which expects to receive many other requests as the number of flying taxicab projects in Europe increases.

The certificate scheme allows drone manufacturers and operators to obtain a design verification from the agency before having the conditional authorization accepted or refused.

Volocopter filed the request for its VC200-2, May 31. Indeed, it’s worth noting the speed of the agency’s response, taking only three weeks to examine and then accept the application. Patrick Ky, the EASA’s executive director, said on the agency’s website: “The short time needed to issue the design verification report demonstrates that EASA is able to develop flexible tools that are adapted to the risk of the drone operation and to the needs of the market.”

The German company can now operate its drone in a clearly delineated low-risk area, but possibly near more constrained spaces. The VC 200-2 is a prototype of Volocopter integrating a technological component allowing for autonomous flight.

These kinds of technological components or modules are fundamental elements such as operating systems or databases. These “building blocks” are then assembled according to a predefined model to provide a technological function. Here, that is autonomous flight.

While the news is largely positive, the EASA is already looking at future regulations regarding traffic, ecology, safety and noise. There is still a long way to go before these autonomous flying taxicabs can be used in urban areas, due to constraints regarding safety, population, obstacles and traffic regulation.

Between now and 2024, everything is still potentially possible for the Olympic Games, but it would be surprising to see flying taxis in city skies before the end of the decade. IB

France to test ‘flying taxis’ from next year: operators