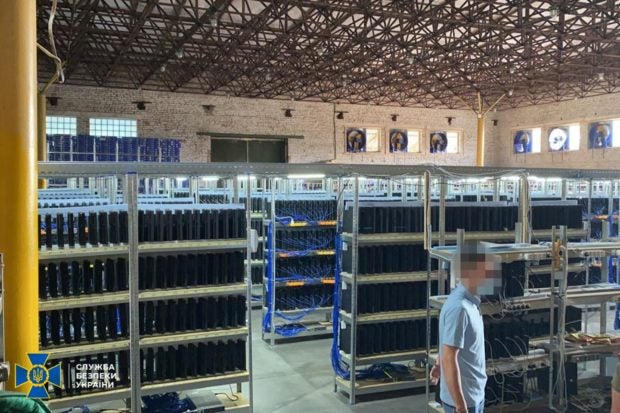 Racks containing thousands of PS4s at a crypto farm in Ukraine (Image: Security Service of Ukraine)

A massive cryptocurrency farm apparently using PlayStation 4 gaming consoles for mining has been shut down in Ukraine for alleged electricity theft.

The illegal crypto farm was set up at an old warehouse in the city of Vinnytsia, according to a July 8 release from the Security Service of Ukraine (SBU). It was reportedly established by residents of the said city and of Kyiv.

The warehouse is located at a former facility of JSC Vinnytsiaoblenerho, from  where the miners were allegedly stealing electricity. They also were accused of using electricity meters that showed fake energy consumption.

“According to preliminary estimates, the monthly losses to the state ranged from 5 to 7 million Ukrainian hryvnias (around $186,200 to $259,300). However, such illegal activity could lead to power surges and left people without electricity,” the SBU stated.

“The SBU initiated criminal proceedings for the theft of water, electricity or thermal energy through its unauthorized use,” the security agency added.

Authorities seized over 500 graphic cards, 50 processors and 3,800 PS4s. While the first two are known to be used in crypto mining, the use of gaming consoles is rare.

Using gaming consoles to mine cryptocurrency, however, is not completely unheard of. For one, YouTuber stacksmashing was able to modify his GameBoy to start mining Bitcoin, albeit very slowly.

Ukrainian authorities were reportedly still investigating the said crypto farm and those behind it. They were also trying to find out if officials of JSC Vinnytsiaoblenerh were somehow involved.  /ra

‘Doge’ meme photos now being auctioned as NFT; proceeds to go to charities