Scientists detect light from behind black hole for first time 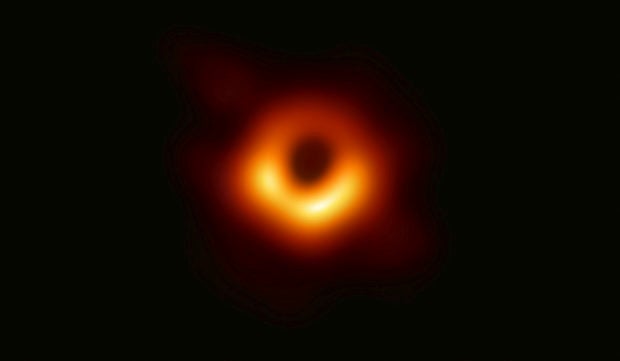 The first image ever made of a black hole from data gathered by a network of radio telescopes around the world (Image: Event Horizon Telescope Collaboration/Maunakea Observatories via AP)

Scientists have detected light “echoing” from behind a black hole for the first time ever, proving Albert Einstein’s general theory of relativity from a century ago.

It is generally accepted that due to a black hole’s extremely powerful gravitational pull, even light that gets sucked in can never escape.

The group of researchers from Stanford University, led by astrophysicist Dan Wilkins, discovered, however, that a black hole’s gravity warping spacetime in its vicinity also allows light to “echo” or bend around it.

The phenomenon effectively proved Einstein’s predictions of how gravity bends light around black holes, the European Space Agency (ESA) said in a release on July 28.

In the recent study, published in the journal Nature, the scientists recorded the light coming from behind a black hole using the ESA’s XMM-Newton and the National Aeronautics and Space Administration’s (NASA) NuSTAR space telescopes.

This particular black hole is 10 million times bigger than our sun and is located at the center of a nearby spiral galaxy called I Zwicky 1, around 800 million lightyears away from Earth.

“The X-ray flares echoed off of the gas falling into the black hole, and as the flares were subsiding, the telescopes picked up fainter flashes, which were the echoes of the flares bouncing off the gas behind the black hole,” the ESA explained in a release on July 28.

“The X-ray flare observed from I Zwicky 1 was so bright that some of the X-rays shone down onto the disk of gas falling into the black hole. The X-rays that reflected on the gas behind the black hole were bent around the black hole, and these smaller flashes arrived at the telescopes with a delay,” it added.

Scientists observed that these X-rays were also changing colors as they echoed toward the back of a black hole.

“Because the X-ray echoes have different colors and are seen at different times, depending where on the disk they reflected from, they contain a lot of information about what is happening around a black hole,” the ESA said.

Wilkins and his team are hoping to use this information to re-create the scenario in 3D. Ian Biong /ra