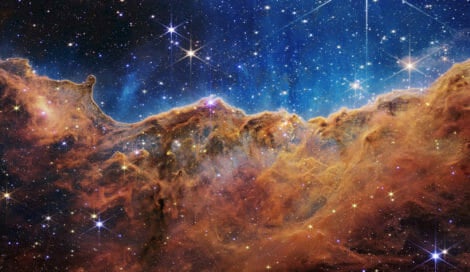 The “Cosmic Cliffs” of the Carina Nebula is seen in an image divided horizontally by an undulating line between a cloudscape forming a nebula along the bottom portion and a comparatively clear upper portion, with data from NASA’s James Webb Space Telescope, a revolutionary apparatus designed to peer through the cosmos to the dawn of the universe and released July 12, 2022. Speckled across both portions is a starfield, showing innumerable stars of many sizes. NASA, ESA, CSA, STScI, Webb ERO Production Team/Handout via REUTERS

GREENBELT, Md. — The powerful James Webb Space Telescope’s inaugural batch of images has opened a new chapter of cosmic exploration, but astronomers say the observatory’s most consequential discoveries may well be those they have yet to even imagine.

Distant colliding galaxies, gas-giant exoplanets, and dying star systems were the first celestial subjects captured by the multibillion-dollar observatory, putting its wide range of infrared-imaging capabilities on colorful display and proving the telescope works as designed.

Webb’s gallery of early photos and spectrographic data, which astronomers likened to the results of mere “target practice” as they readied the telescope for operational science, also previewed several planned areas of inquiry ahead.

The competitively-selected agenda of research includes exploring the evolution of early galaxies, the life cycle of stars, the search for habitable planets orbiting distant suns, and the composition of moons in our own outer solar system.

But the most revolutionary findings by Webb, 100 times more sensitive than its 30-year-old predecessor, the still-operational Hubble Space Telescope, may turn out to be accidental discoveries or answers to questions astronomers have yet to ask.

“Who knows what’s coming for JWST (James Webb Space Telescope). But I’m sure we’re going to have a lot of surprises,” René Doyon, principal investigator for one of Webb’s instruments, the Near-Infrared Imager and Slitless Spectrograph, said Tuesday at NASA’s Goddard Space Flight Center in Maryland, where the agency unveiled the observatory’s first full-color images. 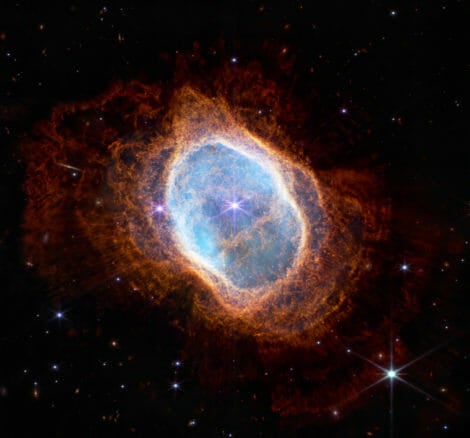 An observation of a planetary nebula from the NIRCam instrument of NASA’s James Webb Space Telescope, a revolutionary apparatus designed to peer through the cosmos to the dawn of the universe and released July 12, 2022. NASA, ESA, CSA, STScI, Webb ERO Production Team/Handout via REUTERS THIS IMAGE HAS BEEN SUPPLIED BY A THIRD PARTY.

With Webb open for business seven months after its launch in December, astronomers are preparing for “something that’s out there that we never guessed would be there at all,” said John Mather, a Nobel Prize-winning senior astrophysicist at NASA whose work during the 1990s helped cement cosmology’s “Big Bang” theory.

Mather and other scientists pointed to dark matter, an invisible and little-understood but theoretically influential cosmic scaffolding, as an enigma that Webb might unlock during its mission.

Hubble, likewise, opened a whole new field of astrophysics devoted to another mysterious phenomenon, dark energy, as its observations of supernovas led to the unexpected discovery that the universe’s expansion is accelerating.

Taken together, dark energy and dark matter are now estimated by scientists to account for 95% of the known universe. All the galaxies, planets, dust, gases, and other visible matter in the cosmos compose just 5%. 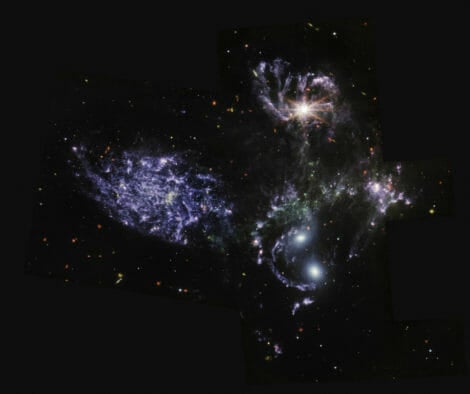 Stephan’s Quintet, a collection of five galaxies, as seen by MIRI from NASA’s James Webb Space Telescope, a revolutionary apparatus designed to peer through the cosmos to the dawn of the universe and released July 12, 2022. NASA, ESA, CSA, STScI, Webb ERO Production Team/Handout via REUTERS

Amber Straughn, a deputy project scientist working with Webb, said: “It’s hard to imagine what we might learn with this hundred-times-more-powerful instrument that we really don’t know yet.”

Dark matter already has figured prominently in Webb’s very first “deep field” image, a composite photo of a distant galaxy cluster, SMACS 0723, that offers the most detailed glimpse to date of the early universe thanks to a magnifying effect called a gravitational lens.

The sheer combined mass of galaxies and other unseen matter in the foreground of the image warps the surrounding space enough to amplify light coming from more distant galaxies behind them, bringing into view fainter objects farther away, and thus further back in time.

At least one of the tiny specks of light “photo-bombing” the edge of the picture dates back 13.1 billion years, or nearly 95% of the way to the Big Bang, the theoretical cosmic flashpoint that put the universe in motion 13.8 billion years ago. 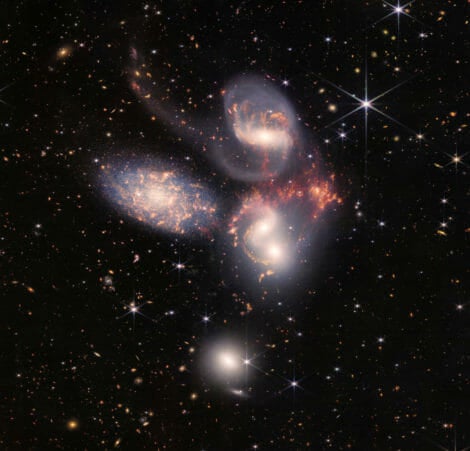 A group of five galaxies that appear close to each other in the sky: two in the middle, one toward the top, one to the upper left, and one toward the bottom are seen in a mosaic or composite of near and mid-infrared data from NASA’s James Webb Space Telescope, a revolutionary apparatus designed to peer through the cosmos to the dawn of the universe and released July 12, 2022. NASA, ESA, CSA, STScI, Webb ERO Production Team/Handout via REUTERS

But because the calculated combined mass of all the visible matter in the foreground is insufficient by itself to produce the faint circular distortion seen in the image, the lensing effect is firm indirect evidence of dark matter’s presence.

“It’s the most powerful tool that we have, astrophysically, to do this type of lensing experiment,” said Jane Rigby, a Webb operations project scientist. “We can’t directly detect dark matter, but we see its impact… we can see its effects in action.”

“The universe has been out there, we just had to build a telescope to see what was there,” she added.

New light was also shed unexpectedly from Webb’s first spectrographic analysis of an exoplanet in a distant solar system, in this case, a gas giant roughly the size of Jupiter dubbed WASP-96 b.

Measuring the wavelengths from light filtered through the atmosphere of the exoplanet as it orbited its own sun clearly revealed the molecular signature of water vapor in clouds and haze, features scientists were surprised to find.

“There are discoveries in these data,” Webb program scientist Eric Smith said. “We’re making discoveries and we really haven’t even started trying yet.”

Webb Telescope: What will scientists learn?