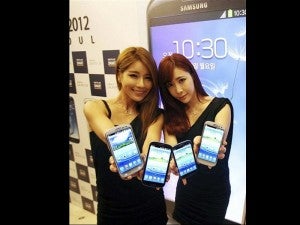 The operating profit for April to June is estimated between 6.5 trillion and 6.9 trillion won ($5.7 billion and $6.1 billion), a nearly 80 percent jump from a year ago, the company said in an emailed statement.

The figure, in line with a median estimate of analysts, beats Samsung’s previous record of 5.85 trillion won profit, reported in the first quarter of 2012.

Samsung said revenue for the second quarter is expected to come in between 46 trillion and 48 trillion won, up around 19 percent from the year-earlier period.

Although Samsung did not break out figures for each division, analysts believe at least 4 trillion won of its profit is from its mobile business.

Brisk demand for the high-end mobile phones helped Samsung offset a weaker profit growth in its semiconductor and other consumer electronics businesses during Europe’s debt crisis.

Samsung began selling the latest version of the Galaxy smartphone May 29, in an attempt to get a head start before its rival Apple Inc. announces a new iPhone.

Analysts estimate Samsung shipped between 48 million and 52 million units of smartphones in the second quarter, including around 6 million Galaxy S III smartphones.