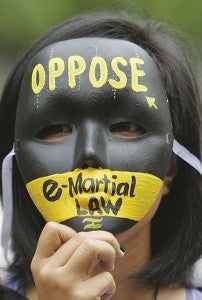 MANILA, Philippines — Lawmakers are hopeful that both chambers of the 15th Congress would seriously study proposals to review and repeal the contentious provisions of the Cybercrime Prevention Act, following widespread protests against the law from netizens.

Hackers calling themselves “hacktivists” joined the protest against Republic Act No. 10175 by defacing several government websites.

Marikina City Representative Romero “Miro” Quimbo urged fellow legislators to “give due time and attention to the law’s review and assessment” following attacks on various government websites by hackers.

Although the lawmaker said that he did not agree that hacking was a valid way of resolving contentious issues on the cyber law, Quimbo said the attacks represented “sentiments that Congress must pay attention to.”

He said that although there were better ways to protest RA 10175, hacking was considered by netizens to be a way of showing what they could do as the government continues to be “stubborn” in its refusal “to address legitimate concerns of the people.”

But like Quimbo, Citizens Battle Against Corruption (Cibac) Partylist Representative Sherwin Tugna asked that the people to go easy on their attacks and to wait and see how the bills seeking to amend RA 10175 filed at the House and the Senate would turn out.

Speaker Feliciano Belmonte Jr. earlier said that they respected the bill filed to repeal the new law at the House of Representatives.

But legislators have yet to resume work as the House is on recess while those planning to run in the 2013 midterm elections prepare to file their certificates of candidacy (COCs) within the week.