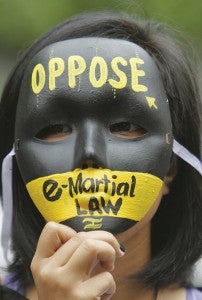 MANILA, Philippines — The sponsor in the Senate of the Cybercrime Prevention Act wants Justice Secretary Leila De Lima to keep herself from blocking access to websites even if they are found to violate the provisions of the much-criticized law against Internet crimes.

Senator Edgardo Angara, the sponsor and one of the authors of Republic Act No. 10175, admitted having reservations on Section 19 of the law that has given the secretary of justice the authority to block access to websites committing child pornography and other crimes spelled out in the new law.

“I think there is some ground for questioning not the authority granted but the lack of precaution and safeguards in the exercise of this blocking authority.

For instance, in the warrant of arrest or search, you need a court order before you can do a search or effect an arrest,” Angara said in a news forum.

“Personally, I would recommend that we ask the secretary of justice when promulgating the rules and regulations to suspend the exercise of this power in the meantime before the Supreme Court decides on this particular issue or the Congress passes the amendatory law,” he added.

The Senate version of the anti-cyber crime law was passed on third reading on the morning of Jan. 30.

The Senate was holding its sessions on mornings at that time due to the hearings in the impeachment of then Chief Justice Renato Corona in the afternoons.

Re-electionists Legarda and Escudero have said they are in favor of removing the online libel clause in the cybercrime law.

Angara wouldn’t blame the impeachment of then Chief Justice Renato Corona for what appears to be a collective oversight that allowed the provision on online libel pass second reading without objection.

Angara himself expressed reservations on the provision allowing the secretary of justice to restrict access to websites that violate the anti-cybercrime law.

“To be fair to my colleagues, I think we all paid attention to it,” Angara said when asked if the impeachment trial was a factor why the provisions objectionable to his colleagues passed Senate scrutiny in January.

Some lawmakers are protesting the online libel provision now that President Aquino has signed Republic Act No. 10175.

“Even when you closely study something, sometimes you still miss some points,” Angara told reporters.