More cheers than jeers from netizens for Leni Robredo’s decision 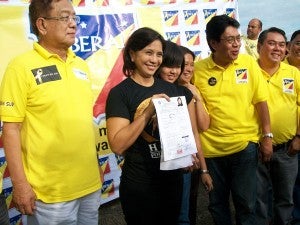 Leni Robredo with daughter Jillian shows off her certificate of candidacy. She is flanked by Liberal Party candidates in Naga City, from extreme left vice mayoral candidate Nelson Legacion, reelectionist mayor John Bongat and incumbent Vice Mayor Gabriel Bordado, who withdraw his LP endorsement for congressman and endorsed Leni in the morning of Oct. 5. DANNY AREUS/INQUIRER

Leni Robredo’s decision to seek a congressional seat in Camarines Sur met with more cheers than jeers from netizens, most of whom also expressed surprise at her sudden change of mind.

The widow of the venerated Interior and Local Government Secretary Jesse Robredo had earlier disavowed any political ambition, insisting that she’d rather devote her time to her three daughters and would, at most, accept a posting as a regional trial judge in Bicol.

But Robredo on Friday filed her certificate of candidacy as representative of Camarines Sur’s third district against Nelly Villafuerte, wife of three-term congressman Luis Villafuerte of the well-entrenched Villafuerte political dynasty.

“She’s the only person who can challenge the Villafuertes,” Elizabeth Enriquez (@BethEnriquez) tweeted on @Inq_Opinion, the official Twitter account of Op-Ed of the Philippine Daily Inquirer.

Why not a Senate seat?

But while people have been generally supportive of Robredo’s plunge into electoral politics, a few registered disappointment that the Robredo widow had settled for a congressional run instead of gunning for a Senate seat.

“I wish she ran for Senate. We need new breed in the Senate,” tweeted Inquirer.net user Bong said.

Another user, 12JEM, said: “I wish she ran for the Senate for (a) sure win. And [it] would have been a good addition to that body. But good luck. I hope (the) former SolGen will withdraw and just help the good lady to defeat the wife of Congressman Villafuerte.”  (Editor’s Note: Former SolGen Anselmo Joel Cadiz did.)

“I wish Leni ran for Senate instead,” similarly tweeted TV host Daphne Oseña Paez (@DaphneOP). Her view was shared by @baby0811 and @ashram3072.

A few also expressed reservations about her candidacy, including Twitter user @dave0324 who said: “It would have been better if Leni Robredo didn’t enter politics. Sayang (too bad).”

Twitter user @sonnyverse meanwhile alluded to the intense political pressure that must have pushed Robredo to finally run for public office:  “I feel that Atty. Leni Robredo needs a lecture on ‘peer pressure’ but…OK.”

But the good wishes and mention of Robredo’s leadership qualities dominated the reactions and comments on social media.

“She is a good person and will probably be a good leader for CamSur. I just hope she’s not forced into it,” tweeted Anthony Rocha (@crabones013).

“Nothing wrong with it as long as she upholds the ideals and good governance of her late husband,” wrote Ive de la Fuente (@ivedelafuente).

“She is a lawyer by profession, should be honest like her husband. Very much qualified, electorate need her!” from Jake Picache (@jpicache).

Twitter user @unicamaldita_ said: “I hope others will learn from the goodness of the Robredo couple.”

According to Inquirer.net user Dell Keyboard: “CamSur is lucky to have a candidate who is competent.”

Cheered user @suigeneris1111: “Go Atty. Leni Robredo! Show them what good governance is all about.”

But journalist  Inday Espina-Varona said she was sad when Robredo said she decided to run to save the Liberal Party in Camarines Sur from losing to the Villafuertes.

Writing on Facebook, Espina-Varona said: “What a terrible reason to run. Oh you LP guys, that’s such disrespect for the legacy of Jesse. … Leni may be the silver lining but the reason makes me wonder, how determined are we really to change?”

Others who frowned on Leni Robredo’s leap into Bicol’s political cauldron posted their feeling on @Inq_Opinion.

“She shouldn’t have. This is like Noynoy running for president because Cory died,” wrote orjy @OrjyDumaong.

“Leni should realize that her husband’s traits/values are not transmitted via osmosis. Disappointingly trapo [traditional politician],” tweeted @NegaStarr.

And as if in reference to the country’s political landscape where politicians field sons, siblings and spouses to maintain a political lineage, Singapore-based journalist Roberto Z, Coloma posted on his Facebook: “Necropolitics is alive and well in the Philippines—pun totally intended.”   Compiled by Fe Zamora, with reports from Inquirer Research