Globe voted as Best Telco in the Philippines by CNET Asia 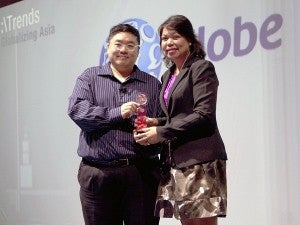 MANILA, Philippines–Reinforcing its position as one of the preferred telco brands in Asia, Globe Telecom was recognized as the Best Telco in the Philippines in the prestigious CNET Asia Readers’ Choice Awards held in Singapore last January 31.

Globe was voted best telco in the country by thousands of CNET Asia readers who voted online for the best tech brands and products in Asia for 2012-2013.

To recognize the best brands, CNET Asia (asia.cnet.com) asked its readers to nominate their standout products/brands as part of the 8th Annual CNET Asia Readers Choice Awards. Covering the best tech from 2012-2013, over 297,000 votes from CNET Asia readers were captured in over 7 weeks to determine the winners. The voting was opened to all online readers from CNET Asia.

The brands and products voted by consumers were selected by the CNET Asia editors based on overall reader popularity and feedback, performance via CNET Asia lab tests, in addition to value and impact. From there, three products from each category with the most number of votes were awarded the CNET Asia Readers’ Choice Awards.

CNET Asia is one of the most reputable technology online media in the region and its product reviews are widely read by consumers. CNET Asia is published by Asia’s largest online media publisher CBS Interactive.

“We are proud to be recognized as among the best in the region,” said Ernest Cu, Globe president and CEO. “We thank the readers and our customers who believed in our brand and what we do in the organization.  This award strengthens our resolve to transform the landscape of Philippine telco industry and change the game again through our innovative products and services.”

The company’s successive quarters of growth over the last two years have been admired by industry watchers and analysts.

Delivering superior mobile and internet products, the company has a robust subscriber base of over 32 million. Its customizable plans propelled the company’s postpaid business, growing this to over 1.7 million subscribers, and cementing brand leadership. Globe also leads in the broadband category with its Tattoo nomadic and @Home products.

Globe is currently rolling out its $700-million network modernization program that will bring to the Philippines the most advanced, future-proof mobile network built to provide higher call quality, pervasive 3G and 4G coverage, and faster mobile internet experience all over the country.

Globe has won several awards last year including its back-to-back 2011 and 2012 Telecom Service Provider of the Year and 2012 Broadband service provider of the year from global business research and consulting firm Frost & Sullivan.–INQUIRER.net