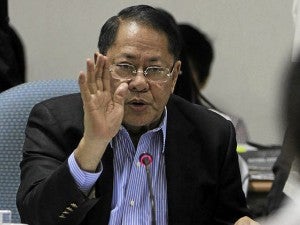 “That’s good because the next Congress will have time to revise and see what needs to be refined and changed in the cybercrime law,” Angara told reporters Tuesday.

He said that it was also a good thing the SC issued a TRO so that “whatever weaknesses [it may have] can be addressed by the next Congress. We no longer have time to correct what the SC says should be corrected.”

The Cybercrime Prevention Act of 2012 was previously issued a TRO in October last year after 15 petitioners questioned the constitutionality of the law.

Section 19, which allows the Department of Justice to take down a website without a court warrant, and Section 12, which allows authorities to obtain traffic data, were particularly assailed by the petitioners.

“They are not saying it is unconstitutional, they are still studying it so it’s OK,” Sotto said.

The Senate will take a break beginning Wednesday to give way to the May 2013 election campaign.