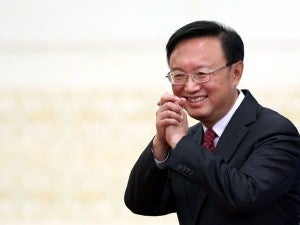 Chinese Foreign Minister Yang Jiechi leaves after a news conference in Beijing’s Great Hall of the People, China, Saturday. China’s foreign minister has rejected accusations that the country’s military was behind massive hacking attacks on US and other foreign targets and called for more international cooperation in policing the Internet. AP FILE PHOTO

BEIJING — China’s military is denying renewed U.S. accusations of carrying out cyber-attacks and says the sides should cooperate against the global threat of computer crime.

A People’s Liberation Army researcher described the accusations in the latest Pentagon report on the Chinese military as irresponsible and harmful to mutual trust between the sides. Senior Col. Wang Xinjun was quoted by the official Xinhua News Agency on Tuesday as saying the Chinese government and armed forces have never sanctioned hacking.

The annual Pentagon report released Monday included for the first time the claim that at least some attacks on U.S. and other computer systems appeared to be “attributable directly to the Chinese government and military.”

China denies such accusations and says the sides should build trust and mechanisms to fight cybercrime.

FEATURED STORIES
TECHNOLOGY
PH to launch biggest satellite in 2023
TECHNOLOGY
Google AR ‘Measure’ app turns Android phones into virtual measuring tapes
TECHNOLOGY
Kai Sotto continues to inspire Filipinos by sharing his passions and stories with Smart Prepaid
TOPICS: China, Cyber attack, News, US
Read Next
Microsoft touching up Windows 8 to address gripes
EDITORS' PICK
Alex Eala wins Grand Slam on Independence Day: ‘I hope I made my contribution to the country’
Palace: Duterte to announce new quarantine classifications; ‘normal’ GCQ likely in NCR Plus
Ahead of ONE: Full Blast II, Mongkolpetch warns Elias Mahmoudi: ‘Watch out for my fists’
Liza Soberano’s ‘Trese’ stint defended by voice actor Inka Magnaye
Synology NAS: A photo storage and multimedia server for your home
3 die, 110 recover from COVID-19 in Aurora province
MOST READ
‘Hindi pwedeng take 2,’ Sotto tells presidential, VP aspirants
Lacson: Kind-hearted Leni ‘in it to win’ presidency in 2022, but…
Not even found in Tiktik: Another bad word snuck into DepEd materials
Sotto, Villanueva react to LGBTIQ+ promise not to give them votes
Don't miss out on the latest news and information.