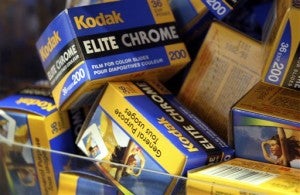 Eastman Kodak Co., the 131-year-old company, which popularized photography beginning with the Brownie box camera in 1900, is looking for a lucrative patent-infringement triumph this week over iPhone behemoth Apple Inc. and BlackBerry maker Research in Motion (AP Photo)

Kodak shares rose 3 cents, or 1.3 percent, to close Wednesday at $2.34. The 131-year-old photography company’s shares are close to their lowest level in more than 30 years.

Wednesday’s announcement comes while Kodak is suing Apple Inc. and Research In Motion Ltd., the maker of the BlackBerry phones, saying their phone camera features infringe on some of its patents.

The patents Kodak is shopping around account for about 10 percent of the company’s total portfolio. It said it hired investment bank Lazard LLC to explore “strategic alternatives” for the patents.

With sales of film dwindling, Kodak has become more aggressive about licensing its patents. Since 2008, it has generated almost $2 billion in licensing fees and royalties from intellectual-property battles, both in negotiations and through the courts.

Three weeks ago, a consortium that included Apple, RIM, Microsoft Corp. and Sony Corp. pledged to pay $4.5 billion for a collection of patents from Nortel Networks, a bankrupt Canadian maker of telecommunications equipment.