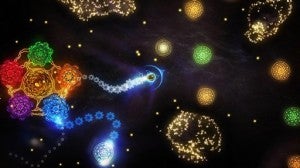 In this video game image provided by THQ Inc., a scene is shown from the meditation game "Deepak Chopra's Leela" (AP Photo).

LOS ANGELES — At the end of a long day, many gamers zone out by competing in online death matches, or they check out by escaping to virtual realms. Spiritual leader Deepak Chopra is hoping gamers will instead choose to chill out with “Leela,” his ambitious new effort to combine gaming and meditation.

“I personally believe that you can accelerate neural development and biological evolution through video games,” said Chopra. “Unfortunately, that’s not what we’re doing right now. What we’re doing is creating addictions to violence, adrenaline and mindlessness, rather than mindfulness. That was my personal motivation to get involved in this medium.”

“Deepak Chopra’s Leela” from THQ Inc. will use the Xbox 360 console’s controller-free, camera-based Kinect system to detect users’ bodies, then guide them through meditation exercises. (An edition for Nintendo’s Wii requires players to hold a controller.) “Leela,” which translates to “play” in Sanskrit, is less of a game and more of an experience, though there are a few gameplay elements.

Seven different interactive exercises based on the seven “chakras,” the points along the body that Chopra says serve as energy centers, task players with moving their bodies to control graphics onscreen set to a soothing soundtrack. The mini-games increase in difficulty, but “Leela” places no importance on a final score or even finishing the exercises.

The root chakra exercise, for example, directs players to tilt their hips to seed a virtual planet, while the heart chakra exercise uses players’ hands to harness fireballs that release gems imbedded in descending rocks. Peter Armstrong, director of product development at THQ, said transforming Chopra’s teachings into gameplay was a difficult endeavor.

“We wanted to make sure each of the movements was fun and replayable,” said Armstrong. “That’s why we did more than 500 prototypes. We took the teachings and tried to boil them down. We would show those to Deepak and some of his experts, but there were several instances where they just didn’t work. They just didn’t quite fit the meaning of that chakra.”

Armstrong said the developers had the toughest time wrapping their heads around the throat chakra. At first, the game makers wanted to craft a mini-game that would take advantage of Kinect’s vocal recognition capabilities, but Chopra instead steered the game makers toward creating a fluid experience that would be more about communicating than screeching.

One of the guided meditative modes uses Kinect’s depth sensor to measure seated players’ breathing patterns. The result is displayed onscreen as three undulating bars. As players move their chest, the soothing voice of yoga instructor Elena Brower provides instruction on how to control breathing. It’s the first such use of the technology in a Kinect game.

“It’s not foolproof,” said Armstrong. “We’re not selling it as a solution for measuring breath. It’s just a tool for people to use. It may not work for certain people, but we’ve done so much testing on it that we think it will help most people visualize breathing in a new way. You may think you’re taking a deep breath until you see it in front of you.”

Most titles created for Kinect, which was released last year by Microsoft Corp. for the Xbox 360, have employed the motion-detection technology for fitness, choreography, sports and rhythm games. Armstrong said the goal of “Leela” is to appeal to both stressed-out gamers and longtime Chopra devotees who desire a new way to unwind in their living rooms.

Using gaming devices for relaxation techniques stretches back to the 1980s when Amiga computer operating system developers reportedly created an in-house game called “Guru Meditation” that required users to sit completely still on a Joyboard, a balance board controller for the Atari 2600 console that worked much like Nintendo’s Wii Balance Board.

In recent years, a few mainstream game makers have toyed with stress-killing gadgets. Nintendo Co. unveiled the Wii Vitality Sensor at the Electronic Entertainment Expo in 2009, and Ubisoft Inc. demonstrated the Innergy Sensor at E3 the next year. Both doodads hugged users’ fingers and measured body signals. However, neither has yet launched the devices.

“The Journey to the Wild Divine,” a niche game released in 2004 for the PC that also featured Chopra, used a similar controller attached to players’ fingers that detected and transmitted such biofeedback as heart rate and perspiration. The folksy game required players to complete such feats as breathing evenly and synchronizing their heart rate to progress forward.

Chopra hopes that “Leela,” which is scheduled to launch in the United States on Nov. 8, will mark the beginning of an evolution for the interactive medium. He believes that if gaming consoles add the abilities to wirelessly measure brain waves as well as the intervals between heartbeats that they could be even more beneficial to health and wellness.

“It’s all doable now,” said Chopra. “We just have to bring it all together. If we can measure what’s happening in your body, your heart, your emotions, your breath and your mind, then there’s no reason why we can’t create a new generation of video games that can help accelerate the personal, psychological, emotional and spiritual development of human beings.”