PH warned of losing $2.5B in potential renewable energy investments 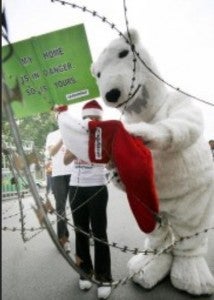 PHILIPPINES, Manila : A polar bear mascot and a Greenpeace volunteers hang a Christmas stocking filled with messages asking lawmakers for the immediate enactment of the “Renewable Energy bill” in front of the Senate building in Manila, 19 December 2007. INQUIRER file photo

MANILA, Philippines – The Philippines risks losing “over $2.5 billion in potential renewable energy investments” due to delays in the crafting of rules and mechanisms that were causing investor uncertainty, a 2013 World Wide Fund for Nature (WWF) report said.

“In 2011, at least 384 renewable energy service contracts were awaiting approval from the Department of Energy (DOE), equaling to 6,046MW of generation capacity,” according to the 2013 WWF report titled “Meeting Renewable Energy Targets: Global lessons from the road to implementation.”

“While the feed-in tariffs has been approved, unfortunately, many of these projects are still in limbo pending the approval of other renewable energy mechanisms…because of administrative bottlenecks,” it said.

The Philippines passed the Renewable Energy Act of 2008 five years ago which puts in place mechanisms that will help the development of the renewable energy sector. Among those, only one, the feed-in tariff has been passed last July 2012.

“The delay has caused frustration among industry stakeholders, who saw the anticipated development of renewable energy projects stalled due to lack of clarity in policies or slow action on these crucial rules,” the report said.

at a standstill and put the country at risk to losing over $2.5 billion in potential renewable energy investments,” it said.

The report also cited the country’s high electricity rates saying it has the second highest rates in Asia and the fourth highest in the world “partly attributed to high costs related to importing fossil fuels.”

“While one of the main strengths of the renewable energy framework is that the policy mechanisms are legislated under the Renewable Energy Act, 2008, many of the details and rules pertaining to these mechanisms have been delayed and un-clarified since the law’s inception,” it said.

“These delays have been caused by resistance from many stakeholders- governmental, private, and utilities, among others- which has been the primary challenge in renewable energy development for the country,” the report said.

Though the DOE aims to triple the country’s renewable energy capacity by 2030 there were still many setbacks that continue to slow the development of the sector.

“Delays in policy decisions have mostly been affected by disagreements within governments and the opposition of various influential groups, such as Electric cooperatives, Freedom from Debt Coalition, Foundation for Economic Freedom, Consumers’ Associations and the Department of Trade and Industry (DTI),” the report said.

“Opposition is mostly based on the argument that a feed-in tariff, to be called the FIT-allowance, will result in additional charges, which will be collected from all electricity consumers,” it added.

The report concluded that the country needs to engage more with all the stakeholders as well as to improve coordination in the decision-making and project planning process.

“Primarily, the challenges that lie ahead in the Philippines for renewable energy deployment and achievement if its national targets will be to properly mobilize all stakeholders involved in the sector through engagement and public participation,” the report said.

“Furthermore, coordinating decision-making and project planning processes, and ensuring the technical and human capacity exist by involving beneficiaries in the development stages, operation and maintenance of projects will help strengthen the sector,” it said.