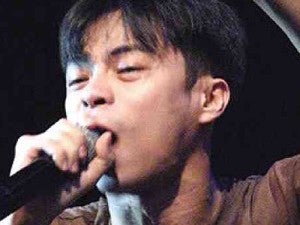 MANILA, Philippines—Rock singer Chito Miranda on Tuesday formally asked the National Bureau Investigation (NBI) to track down whoever stole and exposed his sex video with his girlfriend, more than a week after the clip surfaced on the Internet.

Speaking to reporters at the NBI main office in Manila, the Parokya ni Edgar frontman said a hard drive containing his private video with TV star Neri Naig was stolen along with other items from a safe inside his room at his Quezon City residence.

“There was no sign of a break-in and the (only other) people inside our house were the household help and (members of) my family,” Miranda, 37, said in the interview. He said he already had suspects but declined to name them.

NBI head agent Ronald Aguto said the bureau already had leads on who uploaded the video on YouTube and that they would be the focus of the investigation.

“It appeared that Miranda is serious in his complaint against whoever spread the video,” the NBI official said as he warned those engaged in such activities that they could be charged with violation of the antivoyeurism law.

Actress in no mood to ‘remember’ commitment