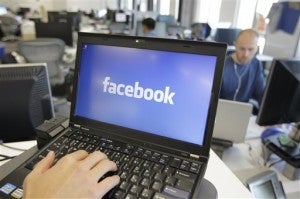 NEW YORK—BlackBerry executives met with their counterparts at Facebook last week over a potential bid for the struggling Canadian phone-maker, The Wall Street Journal reported Wednesday.

Although BlackBerry is weighing a sale, it was unclear whether Facebook plans to bid on the company, the Journal said, citing people familiar with the matter.

The leading social network has made a priority of following its more than one billion members onto smartphones and tablets, and of finding ways to make money from visits by users on mobile devices.

Blackberry has $2.6 billion in cash, though that figure is eroding as the smartphone-maker loses traction in the market.

The company’s patents, with an estimated value of between $1 billion and $3 billion, are likely the most attractive BlackBerry asset for Facebook, the Journal speculated.

The patents namely cover security-network technology and smartphone component patents, which would be key to a company seeking to get a head start in the competitive smartphone market. BlackBerry also has about 70 million subscribers.

Last month, the company reached a preliminary deal for a $4.7-billion buyout by Fairfax Financial Holdings Limited, but also left the door open to other offers.