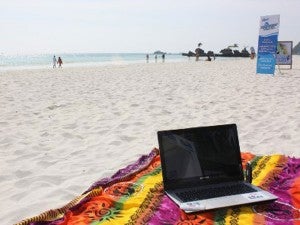 Long Term Evolution ( LTE) is currently delivering download and upload speeds of up to 50 mbps. In the future, data speeds will be raised up to 100 mbps.

Called Long Term Evolution (LTE), this is the latest stage in the development of mobile broadband technology and is popularly referred to as the fourth-generation 4G mobile phone technology.

In Smart’s network, LTE is currently delivering download and upload speeds of up to 50 mbps. In the future, data speeds will be raised up to 100 mbps.

With LTE, users can download entire movies in minutes, songs in seconds and can view high-definition video seamlessly.

Initially, Smart’s LTE service has been made available in the world-famous island resort of Boracay this Holy Week and will soon be rolled out to other areas. LTE data services can currently be accessed using USB dongles attached to laptops or networks, or, via LTE-powered wireless routers providing WiFi coverage.

LTE belongs to the GSM family of mobile phone technologies that are being used by all three cellular operators in the country.

GSM offers various wireless data services with progressively rising data speeds and capacities. These are GPRS, EDGE, 3G, HSPA and HSPA+.  LTE is the latest and most advanced technology platform.

The main advantages of LTE are high throughput, low latency, an improved end-user experience and a simple architecture resulting in low operating costs. LTE is also backward-compatible with existing GSM, 3G and HSPA networks. This enables mobile operators deploying LTE to provide a seamless service across their LTE and previously deployed networks.

With mobile data traffic growing rapidly, operators are accelerating their deployment of LTE, with some foregoing or reducing their use of HSPA and HSPA+ and proceeding directly to LTE.

“The PLDT Group is committed to extending broadband coverage to 95% of the Philippine population in the next three years,” Vea said. “LTE will help us accomplish that goal faster and more effectively.”

According to a recent report from the Global Mobile Suppliers Association (GSA), there were 17 commercial LTE deployments around the world as of end-2010. These included several in Norway, Sweden, Finland, Poland, Germany, Uzbekistan, Estonia and the United States where Verizon Wireless and Metro PCS Communications have gone commercial with LTE.

In Asia, LTE has been deployed in Hong Kong and Japan, where NTT DoCoMo, a shareholder of Smart’s parent company PLDT, has fired up its 4G network.

The GSA says 180 operators in 70 countries are testing LTE, noting 128 firm commitments to deploy commercial services across 52 countries, and another 52 planned pilots in an 18 countries. About 64 LTE networks should be in service by the end of 2012.