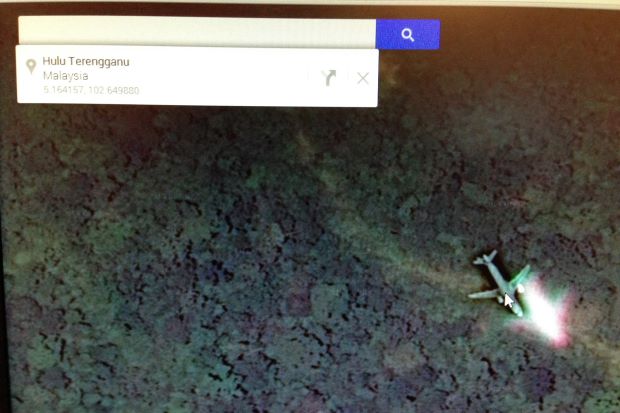 Misleading images of a plane on Google Maps. The Star Online-Asia News Network

PETALING JAYA — Concerned people should not rely on Google Maps to search the missing Malaysia Airlines flight MH370 as it is not live satellite feed.

With the search entering its fourth day on Tuesday, several concerned citizens called The Star, believing that they have discovered the missing airplane after scrolling through the Google Maps satellite images.

Pointing out various airplane images in Google Maps, which clearly shows images of an airplane, most members of the public believed that it was the lost airplane.

A concerned reader who called in, pointed out a location at the Vietnamese island of Cầu Ma Thiên Lãnh, located south west of Ho Chi Minh City as the location of the airplane while another individual emailed the location coordinates of the missing airplane close to the Kenyir Dam in Terengganu.

A spokesperson from Google Malaysia said while various pictures of airplanes will be there at various locations throughout, these are not live images.

“Yes, the images may be there, but it is not real time satellite images as the images may have provided to us several weeks or months ago,” he said when contacted.

“These images which are captured would sometimes contain images of airplanes usually on its flight path and cannot be presumed as a possible crash site,” he added.