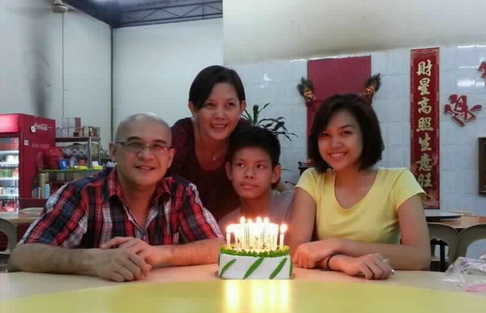 Maira Elizabeth Nari posts a picture of her family with her father, a chief steward who disappeared along with 238 others when the Malaysia Airlines MH370 jet plane mysteriously went off the radar last Saturday. Screengrab from Nari’s Twitter account.

MANILA, Philippines – Three days after the Malaysia Airlines jet plane mysteriously disappeared, the daughter of one of the flight’s crewmen wonders if her father has eaten.

Nari took to Twitter in expressing her sorrow and hope, in a bid to stay strong for her father Andrew Nari, a chief steward in the Malaysia Airlines MH370 jet plane that mysteriously disappeared carrying him and 238 passengers and crew last Saturday.

“I hope that my dad, the rest of the crews, as well as the passengers of MH370 had their dinner already. Sigh…,” she tweeted Monday evening with her Twitter handler account “@Gorgxous_.”

Nari was noticeably strong in her tweets, expressing her optimism that she would be reunited with her father.

“Come home fast, Dad. It’s the only thing I want,” she posted on March 8, or at the same day of the plane’s disappearance, with a photo of her and her father.

“Daddy. You’re all over the news and papers. Come home fast, so you could read them! Don’t you feel excited?” she posted in a separate tweet.

Nari also gave time to recount her memories with her father. “Normally at this hour, before my dad goes to bed, he would tell me this, ‘Don’t sleep so late okay,’ … Goodnight, daddy,” Nari tweeted.

She also took to faith in her hopes that her father was safe. “God is protecting you, dad. Just hold on!” she tweeted. “Have faith, dear self. Daddy is fine,” she also said.

Despite her positive resolve, Nari also expressed some doubts.

“I’m tired; my feelings, my body, my mind. Sigh..” she said in a separate tweet.

With a mix of sorrow and hope, Nari ranted about her disappointment with how the media covered the plane’s disappearance.

“The media… they’re very disturbing. I know that they’re just doing their job, but we need some privacy,” she tweeted.

Nari has received an outpouring of support from netizens. As of Tuesday, Nari gained over 33 thousand followers, with thousands of retweets and favorites for each tweet.

The missing plane has triggered a massive search, as officials remain baffled about its whereabouts. There is still no confirmation that the plane crashed.

But as to the question why the wreckage is difficult to locate, officials said the plane may have disintegrated in mid-air.

With no confirmation of the plane plunging into destruction, a daughter remains hopeful her father would come home again.

“(U)ntil today, we are still waiting for you, dad,” she tweeted with a picture of her family.