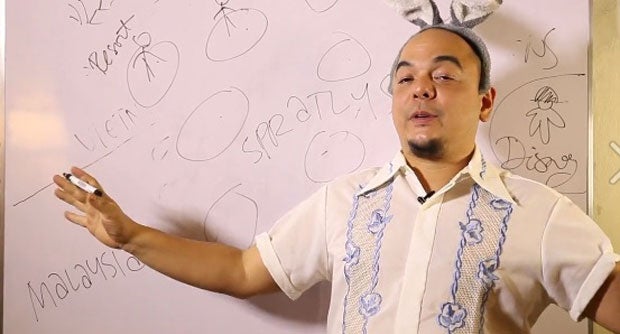 Video grab of Carlos Celdran from It’s No Fun in Pagasa Facebook page.

MANILA, Philippines — How to have fun on a desolate island like Pag-asa?

Keep the mind busy, for one.

A Facebook page called “It’s No Fun in Pagasa” has been set up to help the people in Pag-asa cope with increasing tensions in the West Philippine Sea (South China Sea).

“You can donate by logging on and liking our Facebook page first. We’ll be making shout outs soon. If you just contact us there, we can show you the list of things that they need on the islands. Like chess boards, fishing nets, solar lights, books, books, and more books,” tourist guide and cultural activist Carlos Celdran said in an email interview with INQUIRER.net.

“These people on the island are hungry for mental stimulation,” Celdran added.

Pag-asa Island, a part of the Kalayaan Island Group (Spratlys), is the largest of the islands and islets that is occupied by the Philippines in the hotly-contested waters of the West Philippine Sea. It is the second largest island in the whole of Spratlys and it measures 32.7 hectares, located 480 kilometers off southwestern Palawan. It has a population of about 200.

The island is also claimed by China and Vietnam. China claims nearly the whole of South China Sea. In its attempt to show control in the disputed waters, China has harassed Philippine vessels several times. The Philippines had already submitted a pleading to invalidate Chinese claims.

“The goal of the ‘It’s No Fun in Pagasa’ is to educate Filipinos about issues of patrimony and sovereignty over our share of the Spratlys. We also hope to show how we as citizens can get involved in strengthening these claims. We can keep these islands as Filipino through sustainable technology and creativity. It won’t take military action,” Celdran said.

“The idea was that of American film makers Ethan Page and Eric Flannagan as well as mine and we got Mayor [Eugenio] Bito-onon of Pagasa Island’s support for our endeavors,” Celdran said.

On the Facebook page, two videos of a sober Celdran that appeared to be educational and entertaining feature a lecture on the Spratlys and at the same time called for help.

“I was obviously inspired by Drunk History on Comedy Central but gave it my own twist by using my avatar/spirit bunny persona. I used the drunken act because In Vino Veritas [Latin for ‘there is truth in wine’]. Seeming like uncensored buffoon adds a charm and a believability to the issue. Even though it’s an act,” Celdran said when asked why he was drunk in the videos.

Pag-asa was once a military installation that was later opened to civilian settlement. It is one of the poorest villages in the Philippines and has an airstrip, a small clinic and a small school. It serves as the town proper for 34 years as it is the only island in the Spratlys that is inhabited by Filipinos.

In the second video featured in the Facebook page, Celdran said the people in Pag-asa “are the only things holding us back from being invaded by China. Since it’s a game of who can stay on the island, [these are] the factors we’re playing with…This is our biggest hope in keeping this island in the Spratlys.”

Piña colada in the Spratlys?

Celdran also compared in the video what other Spratlys claimants have done in their respective islands. Vietnam and Malaysia, for instance, built leisure resorts.

“So it is actually two islands by two different countries both serving piña colada and diving as we speak,” he said.

China, meanwhile, “the biggest bully of them all,” built a city hall and placed a thousand people, which Celdran referred to as “a mini-country.”

Celdran is referring to Sansha City, which administers the hundreds of islets, sandbanks and reefs in Paracels (Xisha), Middle Sands (Zhingsha) and Spratlys (Nansha) over the West Philippine Sea.

“But it’s not too late. Eventually we’ll have a marina, a hotel with a nice buffet but it will all come in the future.  The first we gotta do is keep Spratlys ours,” Celdran said further in the four-minute video.

In nearby Ayungin Shoal (Second Thomas Shoal) that is within the Philippines’ exclusive economic zone but at the same time claimed by China, a dilapidated ship with no more than 10 Marines are stationed to keep Filipino presence.

“They’re all bored out of minds…They run out of Biogesic…They even have barely decent drinking water and can you imagine how hot it is on that island? So these people who are protecting us from being invaded by larger more bullying country right above us. We have to keep them healthy and happy and sustained,” Celdran said in the video.

The effort is not meant to belittle the national government. Celdran made it clear that they truly support President Benigno Aquino III’s stand against China.

“I think they are doing the right thing. Now I think we as citizens should do our part too. And the government should assist us naturally. Let the government take the hard line, let the Filipino people add the soft touches in keeping our islands complete as 7,107,” he wrote in the email.

The group of Celdran, in coordination with Bito-onon, will also attempt to put up water filtration facilities, health facilities, donate books, and improve food security.

Celdran said they are “still working on the formalities.”

“Cooperating with a registered NGO that can properly document donations is our first task. Then getting all the technology to the island is the next task. We’re just glad Mayor Bito-onon is giving us support,” he also said.

DFA not aware of China plan to seize Pag-asa Island